As I rock my Hollywould flats (I throw in the towel by the time Friday rolls around) on this cold, rainy, non-June-esque day in New York, the irony that I’m continuing to judge people on the Interwebs based on their legs does not escape me. Missed the Twitter highlights? Click here. But I had to share with you the photos Gillette Venus so generously provided me from the event last Sunday along with a bit more commentary. Call it Everything That Wouldn’t Fit Into 140 Characters. 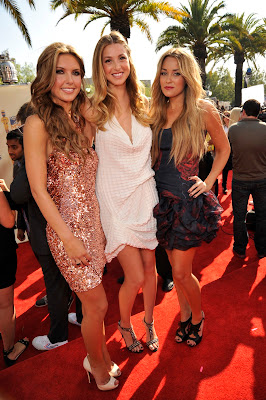 Here she is, dolls, the Best Legs Award runner up Lauren Conrad (only because I’ve never seen better legs on a dude–fauxmosexual or otherwise–than those of Bruno, hence his Best Legs Award title)! I didn’t catch Whitney Port (her legs are always killer!) on the red carpet, but Audrina Patridge looked radiant in person in her pink besequined frock. 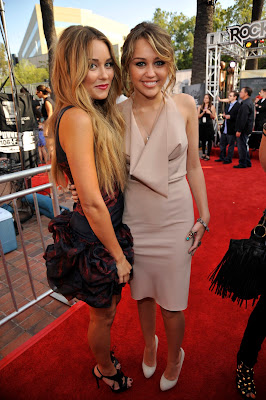 Here she is again, with Miley Cyrus. More on Miley later. 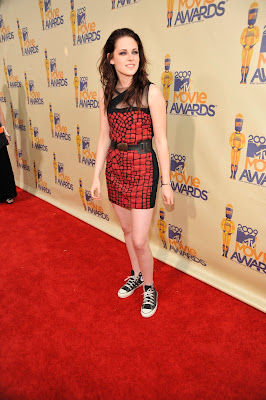 Kristen Stewart, WHY? Why can’t you REPRESENT? This event very well could have been called the Twilight Awards, and here you are, in a dress you paired with Converse. Even Kurt Cobain, KING of Converse, would be like… really? 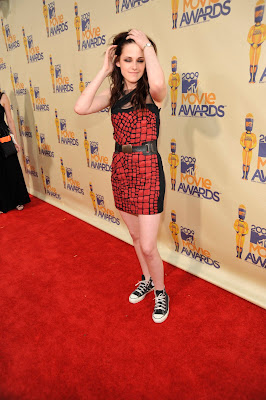 Here’s a pic Kristen touching her hair, for a change. 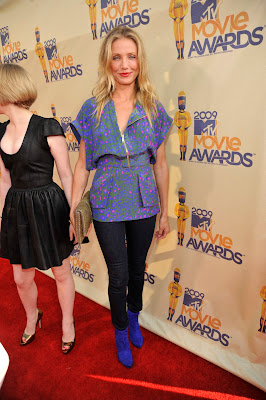 Cameron Diaz, I’m into your outfit. I always feel as if you need 33% more eyeliner, however. Your skinny jeans are totes cute. 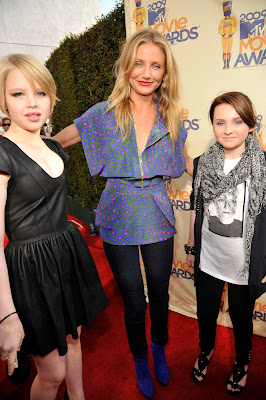 Here she is, flanked by the adorbs Sofia Vasselieva and Abigail Breslin. 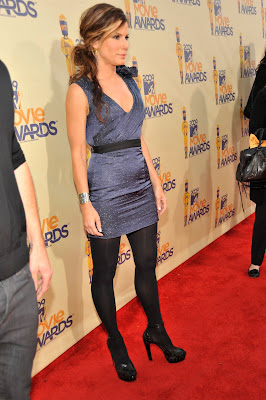 I thought Sandra Bullock looked great, and it wasn’t even because I was totally dazzled by her sexy arm candy. Her tights on a warm spring day denied her inclusion in my Twitter commentary, but other than that, I liked her dress, hair and makeup. 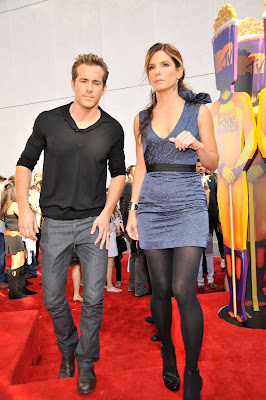 Ryan Reynolds. I KNOW you’re married to ScarJo, but you’re officially the best looking dude I’ve EVER seen in real life next to Brody Jenner. You should seriously send (in your best cursive) a letter to the genetic lottery and THANK them for the gorgeosity that is you. Even in this picture, you’re not actually walking the red carpet in LA with Sandra Bullock. You’re flatteringly backlit in the French Riviera or something. And Enigma is playing in the background. 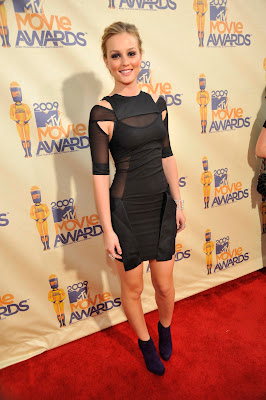 Leighton Meester‘s hair and quasi-tush-showing dress disappointed me, but her makeup was smokily glambitious and her stems were scandalously fab. 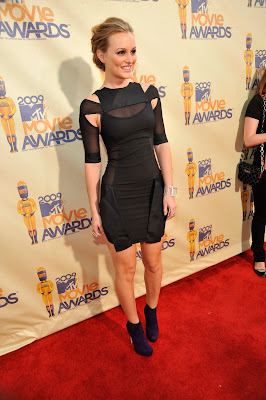 Another pic of Leighton! 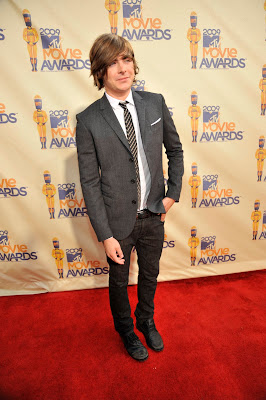 Zac Efron was one of the NICEST celebs on the red carpet. He, along with Tyrese and Peter Facinelli not only acknowledged our press group located at the end of a very long red carpet with minimal aggression on our part, they even paid mind to the screaming fans who ripped down the shrubbery BEHIND us to catch a glimpse. Anywho, Zac is very cute in person. I wish he’d cut his hair a bit, though. LeAnn Rimes can barely fight the moonlight in THIS gown. I lurve its mermaid styling at the bottom. Alas, in it, she’s not gammunicating, but it’s a great choice for a long dress. Her smoky eye was the perfect compliment, but her hair leaves something to be desired. 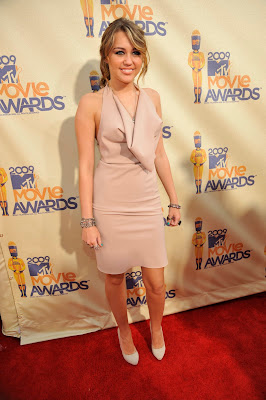 Okay. I was sort of into Miley Cyrus (I may or may not have her Hannah Montana album from a couple of years ago on my iPod. Track 7, The Other Side of Me is especially catchy). But her shout-out/poor way of flirting with Andy Samberg when she presented an awards onstage (though doll, I can’t blame you. He’s on my Top Five list), reminded me of that epic scene in Dirty Dancing. You know, when Baby first dances with Johnny and then does that awkward floppy dance by herself when he leaves her quite abruptly as the song Love Man ends. REMEMBER? It’s awkwardness mixed with a dash of confidence sprinkled over a souffle of reality. Anywho, the color of her Moschino Cheap & Chic washed her out a bit, but the cut was great for her. The nude shoe was a fantastic choice for elongating her stems. 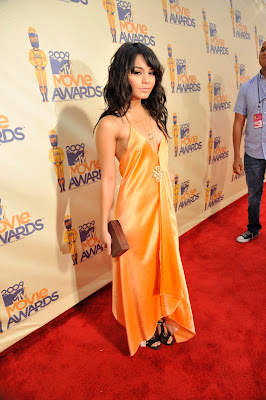 Vanessa Hudgens‘ dress looks sort of like a nightgown, but I’m into its creamsicle hue. Her natural waves and pretty Neutrogena makeup killed it on the red carpet. 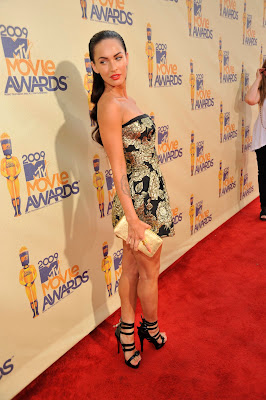 I mean, I know dudes the world over are DYING over Megan Fox and I can appreciate that she’s a very pretty girl. But on a scale of Maxim girl to Butt Slut (a term I picked up from Fashion Binge’s Tamar), she falls squarely into the latter’s territory. Right? There’s just something inheritantly trashtastic about her. Even the dude next to me covering the red carpet told me his crush on her evaporated when he saw her in person. 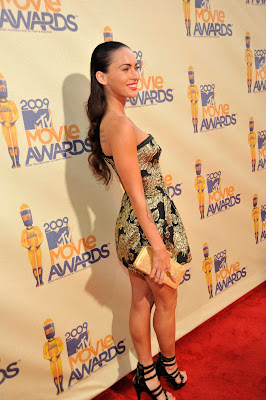 I mean… I can’t. I also wasn’t a fan of her slicked back bad-interpretation-of-a-mermaid hair. I just felt this ‘do didn’t DO much with her assets. 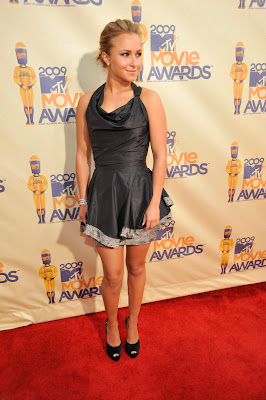 Hayden Panettiere “stem”-ulated the crowd in this black mini. I like the dress’s tutu-esque cut and thought it was an age-appropriate choice. I COVET those simple black peeptoes.

Thanks again to Gillette Venus for this truly fantastical opportunity!