The Fall 2009 collection drew inspiration from the spirit of rock and roll, while the hair and makeup was created to emulate Tao Okamoto’s look, a Japanese model (pictured, left). Phillip wanted the makeup look to mirror Tao’s mod style with a touch of rock n’ roll. With this in mind, Ayako created a look centered around “poetic mod-rock.” “It’s very… girlfriend of Mick Jagger,” Ayako reported. 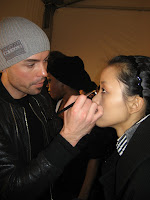 False lashes were placed on the outer half of the bottom lash line and was the central focus of the look. For an exaggerated effect, matte charcoal shadow was used with a wet eyeliner brush to draw lashes beneath, as if to create a shadow effect. “This is the poetic part of the look,” said Ayako. Shimmering pink and gold shadows covered the lids, while the lips were muted with concealer. Skin was made flawless with the newly formulated sheer matte foundation (NEW for Fall 2009) to counteract the sleepy look of the lengthy bottom lashes. A gentle sweep of shimmer was added to cheekbones to catch the light.

Here’s how to recreate the look: 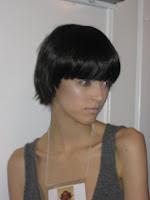 Use a small amount of NARS Sheer Matte Foundation (NEW for Fall 2009) to create even, beautiful skin

With NARS Yachiyo Brush, dust NARS Single Eyeshadow in Bombshell (a glimmering SILVER–can you believe? That Ayako is a MAGICIAN) from apple of cheeks up to temples for a light shimmer without pigment 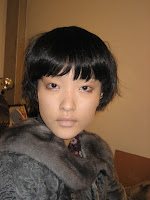 Smudge with finger to bring out gold shine

Apply frosted champagne side of NARS Duo Eyeshadow in Indian Summer (NEW for Fall 2009) over entire lid, blending up to brow 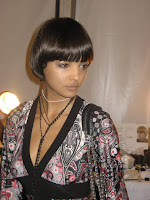 Apply a generous amount of NARS Concelear to entire lip

The fabulous Odile Gilbert led the hair team backstage at 3.1 Phillip Lim. NARS’ PR Directrice Julia (A.K.A. my college roommate), who’s French, introduced me to Odile (also French) en Français. I majored in French, dolls, but conducting a backstage interview using a lexicon I have limited knowledge of (my French lexicon is very in depth when it comes to analyzing literature and film – my French beauty lexicon is embarassingly small) especially in such a loud area was just not happening. Let’s just say the French part of the interview lasted, appropriately enough, about 3.1 minutes. Odile told me that the models were wearing very dark brown/almost black wigs made of real hair. She cut them into a bowl-cut à la Diff’rent Strokes‘ Sam McKinney. 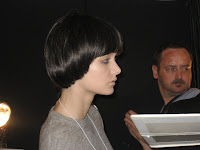 When I asked if she’d applied product to the wigs, she looked at me in a most apropos “Whatchoo talkin’ ’bout, Willis?” manner. Italo Gregario did it backstage at Betsey Johnson last season! And on synthetic wigs, no less. But anywho, Odile confirmed that there was no product involved with this look. 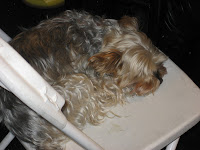 Ayako’s dog gin-gin, named after NARS Concealer in Ginger, took a snooze on a chair whilst his mistress tended to her biz.