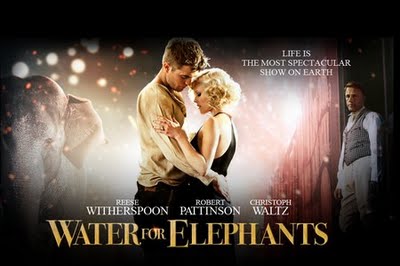 Tonight, I had my first stalking experience. I know, that’s usually reserved for creepy middle-aged men with comb-overs with names like Dennis. Not this time, friends. Not this time. But because grooming is my everything, I was, indeed, taking part in Silky Stalkings. Partially inspired by the ’90s TV show of the same name, Silky Stalkings occurs when you stalk someone’s whole life on the boardwalk–but you do it with the silky, smooth skin one can only achieve by showering with the new Dove VisibleCare Softening Body Wash. The creamy wash even imparts a soupçon of a subtle, fresh scent. The good news is that I was at my most slender in years for my RPattz close-up thanks to three days of a liquid diet and rest due to a stomach virus I’d had this weekend.

Anywho, I, along with my friends Anne and Megan were invited by generous movie sponsor Dove to the world premiere of Water For Elephants starring Reese Witherspoon and ROBERT PATTINSON. So you see the situation.  As I said to Dina in my RPattz-induced stupor (seriously, I couldn’t form a coherent sentence), I announced that tonight was the “Top 1 creepiest moments of my life.” The great news? When it comes to RPattz and stalking, you’re never the creepiest stalker he’s had–not even in the last five minutes. There’s always volume of stalkers. The vision (and cacophony) of him moving his way through the crowd outside the Ziegfeld Theater was not unlike when they first tell you about atoms and how many of them cluster together to form matter. (Matter, as you know, has mass and takes up space). For more on Robert Pattinson and Kristen Stewart at the Water For Elephants premiere, read on…

So Anne, Megan, Dina and I seated ourselves a row over and four rows behind Robert Pattinson and Kristen Stewart. The stalkery details (do you know how hard it is to concentrate on a movie starring Robert Pattinson in a theater where you can JUST LOOK AT ROBERT PATTINSON?) are that he arrived a couple minutes into the movie starting and took his seat next to Kristen, who’d been craning her neck anxiously awaiting his (albeit totally late) arrival. The two whispered to each other a lot throughout the flick (which I thought was excellent, BTW. The Depression-era circus set was totally believable and well done, as were the costumes and makeup) though I saw no PDA. Robert Pattinson wore a black suit and his hair looked washed and only slightly disheveled. Her hair was down and she wore a tan/beige silk one-shouldered dress. She’s VERY tiny in person. Robert got up once during the movie to get some popcorn (the same moment, I might add, that Dina happened to go to the bathroom–she almost DIED when she saw him by the concession stand eating his popcorn straight from the bag sans hands when she emerged from the ladies’). The couple waited till the end of the credits before leaving together at which time my crew and I were able to jump behind them in the aisle and stalk them down like lone dogs for their entire exit from the theater. I should not be proud of this moment. But alas, I AM. What would YOU do?

Buy Dove VisibleCare Softening Body Wash for $6 (whether or not you plan to be a silky stalker) at Target.com.

Thank you, Dove, for an excellent time!