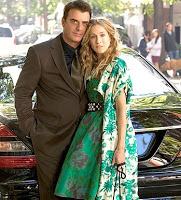 “Women come to this city looking for the big “L” – either Love … or Labels.” –Carrie, SATC:TM

That’s not why I came here, but the movie was still everything I thought it’d be and more. I went to the midnight showing with Carrie (my roomie) at the Kips Bay theater which was an estrogenfest… but it was still phenom. Girls were dressed to the nines and drinking cosmopolitans and putting them in their ghetto movie seat cupholders. It was madness.

Of course, everyone identifies with the show and thinks it’s “their” thing. It’s pretty impressive how a show about late-thirties/early forties single women in NY speaks to EVERYONE. From mid-western housewives to college students. Every gal has her quartet. Every gal has her Mr. Big.

The beauty news? The clothes and hair were PHENOM except when Miranda and Samantha had straight hair. I think both of them look one million times prettier with waves. Charlotte, demonstrably, does not age. As Jessica on GFY says, she must have a photo of herself under her bed doing the aging for her. Char’s hair, as always, shines like the top of the Chrysler Building. And Carrie’s hair looks the best it’s ever looked, as does her makeup. Jennifer Hudson won me over. That girl is talented to the NINES. I think she was so well-cast and did a fantastic job. I simply adore her. Slash I must find out how she achieved that to die smoky eye she rocked throughout the flick. Gorge.

The fashion is to DIE. Samantha wears a series of yellow garments that I’ll simply perish if I don’t have in my lifestyle. She wears a long yellow dress with plunging cleave that’s GORGE and a yellow Pucci beach cover up that I’m deeply in love with.

Anyway. My Sun Shield Treatment at Ouidad was ALSO fantastic, as was the LOST finale. Stay tuned for my analysis of the latter and my review of the former.

2 Comments → Sex and the City: The Movie