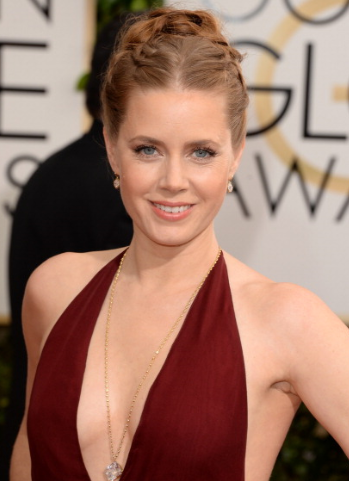 Did we love Amy Adams’ whole beauty concept at the Globes or what? Makeup artist Stephen Sollitto created a sultry 1970s-inspired makeup look for Amy, who won the Golden Globe for “Best Actress (Musical or Comedy)” for her role as Sydney Prosser in “American Hustle.” Sollitto said, “This whole season, in a nod to Amy’s movie ‘American Hustle,’ we have been inspired by the ‘70s. With their fantastic smiles, healthy glows and brushed out hair, we have kept the decade’s style in mind for each look.” Here’s how to recreate the effect at home.

FACE: Flawless, bronzed, glowing skin was the focus of the look

The day of the awards, Sollitto applied the NEW Laura Mercier Smooth Finish Flawless Fluide (COMING FALL 2014) all over Adams’ face. Sollitto stated, “This foundation goes on easily but the finish is very polished. It’s long wearing, oil free and lightweight. The best thing is that is gives you a matte finish so you don’t have to dust your face with loose powder. It’s built in, simple and genius.”

To “catapult” the look into the ‘70s, Sollitto applied a light dusting of Laura Mercier Bronzing Pressed Powder in Matte Bronze, ($32).

He achieved the “perfect glow” by applying Laura Mercier Crème Cheek Colour in Praline, ($24) to Adams’ cheeks using his fingers.

Sollitto applied a mixture of Laura Mercier Crème Lip Colour in Discretion and Tangerine, ($24/each) because the customized shade “supported Adams’ bronzy glow, but didn’t compete with it for attention.”

First, Sollitto created a modern neutral base by applying Laura Mercier Baked Eye Colour in Ballet Pink, ($23) all over Adams’ lids.
Next, he brushed Laura Mercier Baked Eye Colour in Terracotta, ($23) into Adams’ lash line and lid, and sweeping it out at the corners of her eyes and under her bottom lashes.
To make Adams’ eyes “pop,” he applied Laura Mercier Caviar Eye Stick Colour in Plum, ($26) to her upper lash line and the outer corner of her lower lash line.
He then applied Dior Diorshow Blackout Mascara ($25) to her upper and lower lashes.
Sollitto finished the look by dotting Laura Mercier Caviar Eye Stick Colour in Sugar Frost, ($26) to the corners of the Adams’ eyes.