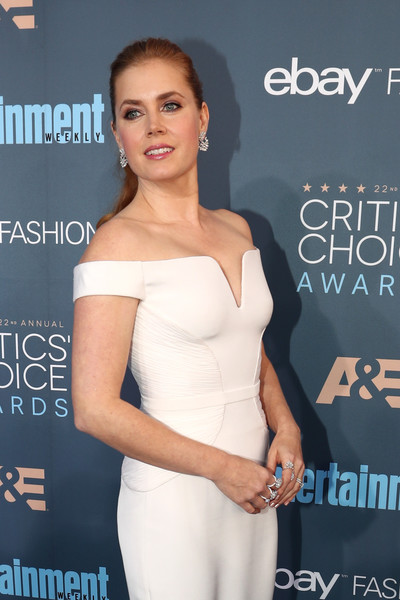 To add dimension to her face, Stephen used a kabuki brush to sweep a touch of Jouer Mineral Powder Bronzer ($30) to Amy’s temples, nose, and chin.

To offset Amy’s white Versace dress, Stephen wanted the cheeks to have color.  He stippled the cheeks with Chantecaille Cheek Shade in Lovely ($26). A shade he describes as “a shimmery pink that perfectly mimics coming in from the cold.”

To create a base color all over the eye Stephen used a soft nude eyeshadow.

Then he applied a Taupe colored Sephora Contour Eye Pencil in Flirting Game ($10) to the upper lash line to give the lashes added definition.

Over the liner he used Chantecaille Mermaid Eye Color in Hematite ($34). He brushed this all over the lid blending up into the crease but leaving out the inner corners. Using the same brush he swept Hematite again under the lower lash line.

After curling Amy’s eyelashes with a Shu Uemura eyelash curler ($20), Chantecaille Faux Cils Longest Lash Mascara ($72) was applied to both the upper and lower lashes to enhance the smoky effect of the bold shimmering Eye Color.

Stephen used his pinky finger to apply Chantecaille Liquid Lumiere in Luster ($39) to the inner corners of the eyes to brighten and draw light to them so that the look did not appear too heavy.

Finally, a faint line of black liquid eyeliner was applied to the outer corners of the eyes to “take your look from day to evening” as Stephen described it, “it makes the lashes look a bit thicker and makes the eyes pop without darkening the whole look.”

Stephen tied the look together with Chantecaille Brilliant Gloss in Glamour ($34) to add a soft pop of berry as she hit the red carpet.