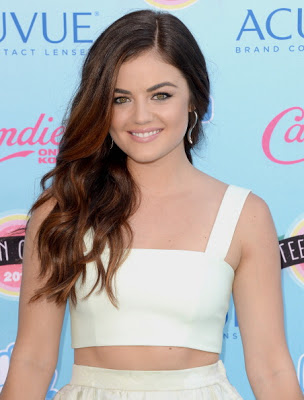 Are we loving Lucy Hale‘s stunning makeup and Malibu Barbie ‘do at the 2013 Teen Choice Awards or what? mark Celebrity Makeup Artist Fiona Stiles created this luminous makeup style while Scott Cunha tended to the hair of the Pretty Little Liars star. Here, how to get the look.

Face
Used Yonka Pamplemousse Moisturizer as a base, followed by a light application of mark. Got the Goods Foundation and mark. Save the Day Concealer, which evened out her skin. Added a little mark. Just Blushing Powder Blush in Charmed and Hourglass Ambient Light as a highlighter to add life and light to the face. Finished with mark. Set Things Right Loose Powder.
Eyes
Used Anastasia Brow Wiz in Brunette on Lucy’s Brows. Then, used i-mark Eye Shadow in Minx over the lid up past the crease and swept it softly under the lower lid. Then I used i-mark Eye Shadow in Moss over the Minx, but kept it closer to the lashes. Finally I pushed i-mark Eye Shadow in Tabac into the lash line for depth. I used mark’s No Place to Run Eyeliner in Black on the lash line, on the outer third of the lower lashes as well as in the waterline, followed by mark’s Get in Line Liquid Eyeliner in Painted Black smudged into and just above the lash line. It isn’t a hard line, it just makes the black very rich and dark. Finished the eyes with mark. Scanda-Lash Go to Mascara in Blackets Black on the top and bottom opened up the eyes.
Lips
We went with a soft pink on the lips, using mark’s Lipclick in Cupid.

For Lucy Hale’s red carpet style, celebrity stylist Scott Cunha wanted to create a beachy look with a little 60s Brigitte Bardot volume.
Step 1: First, Scott started by applying KMS California ADDVOLUME ® root and body lift on damp hair in the crown area in order to create that Brigitte Bardot bump.
Step 2: After blowing out her hair, Scott used a 1 ½ inch curling iron on 1 inch sections of the hair, waving it and letting it set, each section cooling. Then, after shaking out her hair, Scott applied KMS California HAIRPLAY® messing creme into the palm of his hands and emulsified the product by rubbing it together, then scrunching the hair to create a lived in look.
Step 3: Next, Scott sprayed KMS California HAIRPLAY dry touch up on one side, then pinned it back to give it more of a rock star edge.

What do you think of Lucy Hale’s makeup and hairstyle for the Teen Choice Awards?