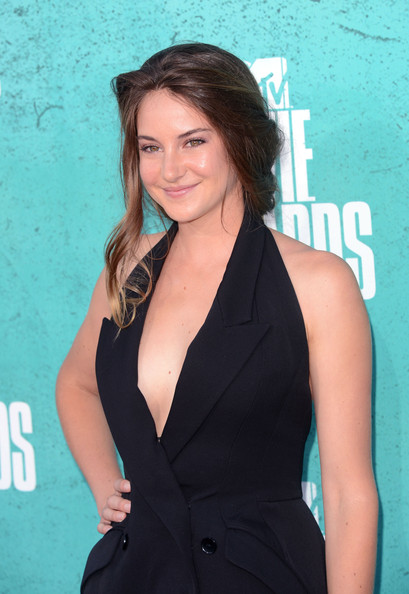 I thought Shailene Woodley looked incredible accepting her well deserved award for breakout female actress at the 2012 MTV Movie Awards. That plunging V, that beachy fishtail braid! I am DYING to do a redux of this one using my new clip-in extensions. Here, hairstylist Jamal Hammadi’s step-by-step how-to for Shailene Woodley’s look.

Says Jamal, “This is such a unique and organic take on the fish-tail braid. VERY Shailene and perfect for the beach. This time around Shai and I were on the same wavelength hair-wise. On the way over I had a vision of a messy fish-tail braid in my head, and what do you know when I walked in and without a word Shailene suggested a pony we are just on the same simple organic ship wavelength.

Using the Hamadi shea cream on dry hair,  I ran it through to the ends and used a 1inch ionic. I then applied apply Hamadi Shea hair cream for styling and adding texture to her beautiful hair. Then I created a loose fishtail braid leaving a few pieces to drop naturally framing her beautiful glowing face. A simple style with stunning results.”

Were you a fan of Shailene Woodley’s hairstyle at the 2012 MTV Movie Awards? And how sweet was she to thank Hawaii in her speech? Delightful!