Ohai, guys! Welcome to a new column called The Thursday Three. It’s pretty self-explanatory, each Thursday I’ll cover three new items in a different category–eye creams, lipsticks, shampoo, etc. We’re going to start with fragrance, with which I’m on a tear, BT dubs, since reading Luca Turin and Tania Sanchez‘ Perfumes The Guide. That book is so hilarious I shouted lines of it to my father in the front seat of the car on the way to dinner on Rosh Hashana, though he’s utterly uninterested in fragrance and HE thought it was hyster.  So without further ado, my favorite new scent launches.

1. Clinique Aromatics Elixir 40th Anniversary Perfumer’s Reserve ($75)
Fragrance enthusiasts know that Aromatics Elixir is older than the hills (The Hills, even) so while it seems like an odd choice for a launch, please know that the SPESH limited-edition 40th anniversary iteration IS brand spanking new. I remember it coming in my Gift With Purchase packs I scored with my new Almost Lipstick in Black Honey or Lipstick in Tenderheart (the perfect pinked-off nude). It boasts crisp bergamot and orange blossom in addition to its cult formulation for a brighter citrus twist. The absolutely gorge bottle is made of amber-tinted glass to resemble the golden robe of a finely aged cognac. There’s also a solid perfume necklace and a perfume spray. 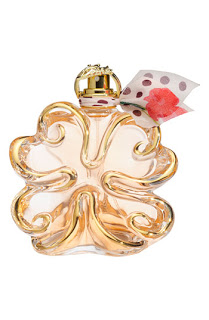 2. Lolita Lempicka Si Lolita ($72)
In 2003, I was OBSESSED with the original Lolita Lempicka and its whimsical bottle but mostly for its beautiful olfactory journey that made me feel like a sprite in flight instead of a receptionist with a temporary gig at a law firm, which, for the record, I was in 2003. BUT the men of Paul, Weiss LLP were powerless against the allure of the Lempicka so I wanted to test out the franchise’s latest edition, which includes the spicy freshness of sweet pea. Originally put off by its presumptuous name (it’s kind of like buying a hotel room before asking your date to the prom), after one whiff I changed my tune. Housed in an adorable stylized floral bottle with a scarf that recalls Carmen Miranda around its neck, this scent is SASSY.
Pink peppercorn invigorates while an airiness imparts a singularly gossamer vibe while managing to somehow evoke a masculine quality. Love. 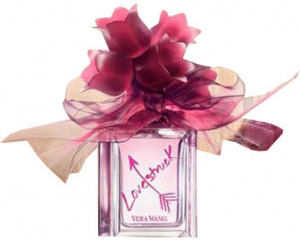 3. Vera Wang Lovestruck ($48)
This scent follows the latest trend that the bottle should be an opus in and of itself–check that action OUT. The burgundy pink flowers are beautiful. The fruity floral is houses is a romantic composition with a slightly mature demeanor. As for which fictional character would it suit? It’s a fragrance I see Prime‘s Rafi wearing–sultry sheer musk decorated with a tuberose essence. It’s Flowerbomb-esque with an added freshness. Get involved.

What item would you like to see covered next week on Three for Thursday?