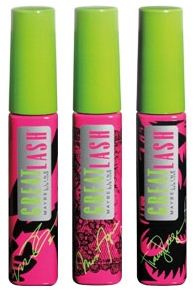 I’ve decided it’d be fun to give you guys a little shopping inspiration post-Irene, while we’re al sitting around doing nothing waiting for what feels like, in the words of REM, the end of the world as we know it. An earthquake and a hurricane in the same week–on the east coast? Cra. First up on your post-apocalyptic shopping list? Maybelline‘s limited edition 40th anniversary designer-designed trio of their iconic lash lengthener, Great Lash. It’s a makeup artist fave the world over for its incredibly easy-to-apply, wetter than wet formula. Fun fact: The original tube we all know and love in its pink and green glory was inspired by then up-and-coming designer Lilly Pulitzer back in 1971. Read on…

The 2011 Great Lash Mascara designers Tracy Reese, Max Azria and Vivienne Tam (she collaborated with HP back in 2008 on a mini laptop) revamped the tubes with their own aesthetics; a graphic floral print, a black lace design and the Chinese symbol for “lash”, respectively. The tubes will be sold exclusively at Target for $6.99 starting in September.

In the meantime, enjoy the selected works of Scorpions. You know this ditty.

While your mascara should be wetter than wet (like Great Lash), your PERSON should not. Stay dry out there, dolls. See you post-Irene.