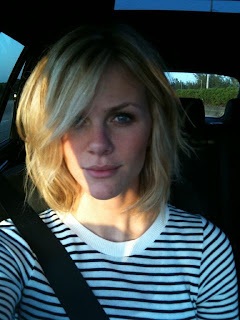 Ted Gibson gave Brooklyn Decker a MAJOR hairstyle overhaul. Brooklyn arrived to the W Hotel in Ft. Lauderdale (where Ted’s latest salon is slated to open later this year) around 3pm this afternoon and went up to the penthouse for her appointment with Ted and Jason Backe (I’m so glad Brooklyn and I now share a colorist–let’s hope it’s just one of the MANY things we have in common going forward). For more deets on Brooklyn Decker’s new haircut, read on…

Ted talked with her about the look she wanted, they looked at some pictures for inspiration and ultimately Brooklyn decided she wanted to go for a more sophisticated look, so Ted gave her an above-the-shoulder layered bob with soft fringe. Jason then gave her lowlights and highlights using L’Oreal Professionnnel’s INOA for a slightly darker take on her beachey blonde locks.

I’m LOVING her hairstyle transformation! What do you think, lovies? Yay or nay?