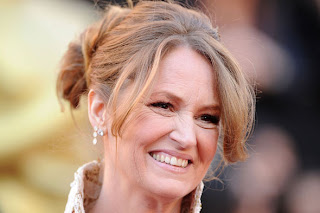 Melissa Leo‘s hairstyle was stunningly pants (in the words of Felicia Sullivan). The notorious F-bomb dropper (and speech not-writer-downer! Slash, love you, Melissa–you were all “get in the cah, we’re going to find that MTV skank” in the movie. And it was Masshole-style epic.) I got the scoop on the steps to recreating this fabulous look at home, courtesy of Melissa Leo’s 2011 Oscars stylist, Creighton Bowman, who used Leonor Greyl products. Check out the video and look below for all the steps.

In the words of Creighton: “The initial idea for Melissa Leo’s Oscars hairstyle was to create something effortless and carefree à La Dolce Vita, but the look also needed to be about the silhouette: I developed a style that would complement the dramatic collar of her dress and elongate the line of her body.

I started out by applying Leonor Greyl Lait Luminescence Bi-Phase Detangling Milk and Condition Naturelle Heat Protecting Styling Spray to Melissa’s towel-dried hair. I used Gel à La Kératine, an alcohol-free styling gel, on her hairline to hold all of the tiny, curly strands in place.

Then, I blow-dried her hair with a medium-sized round brush so it wouldn’t be completely straight: I wanted a little curl at the ends. One of the best things about doing a round-brush blow-dry is that it enables you to lock in shine even if you are creating a rough, modern texture.

After drying, I worked a few drops of Serum de Soie Sublimateur, a silicone-free anti-frizz serum, through Melissa’s hair; created a section from ear to ear across the back of her head; and pulled the section up into a high, tight ponytail. Then, I loosely incorporated the sides and top of the hair into the ponytail to achieve softness while maintaining tightness at the nape of her neck. It was very important to keep it tight in the back to avoid interfering with the collar of Melissa’s dress.

I wrapped the pieces into a high chignon and secured everything with Voluforme setting and styling spray. Before the red carpet, Melissa and I had a bet going about her hair: she said she would let me do an updo if I could achieve the whole look with four hairpins or less. I like to call it “The Four Hairpin Challenge.” I knew that I could definitely do that with Leonor Greyl products!

After a little backcombing at the crown of Melissa’s head, the final step was to tease out the pieces in the front. My method to create that sort of effortlessness is to pull everything back and let whatever falls out fall out. If you force strands out to frame the face, it looks too specific, but if you let them fall out naturally, it produces a very soft effect.”

What did you think of Melissa Leo’s 2011 Oscars hairstyle?