After styling New Moon actress Ashley Greene’s hair for the movie premiere last week, Ted Gibson was at it again last night for Ashley’s appearance at the Ed Sullivan Theater for The Late Show with David Letterman. Instead of a trendy ponytail (right image), Ted cut Ashley’s hair to give her a sleek blow out with body and shine for her TV appearance and match her fashionable red, pinstripe suit. 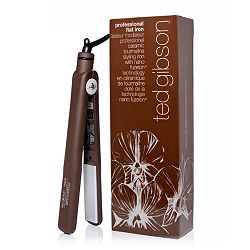 “I actually cut her hair from extra long to right below the shoulder. I used Hairsheet Styling mixed with Fix It gel by Ted Gibson to create this ultra chic modern look. Next up, Ted Gbson Flat Iron to make hair super straight. Added polish and shine with Tame It shine lotion by Ted Gibson to smooth flyaways then Beautiful Hold hairspray to hold in place but still achieve a moveable style.”