Let’s discuss New Moon, shall we? I should probably be embarrassed about the fact that I pretty much blew my allowance by seeing it twice this weekend. The first movie trip was on Friday night at 8pm (opening night) at Kips Bay with the flat-ironed, Tasti D Lite consuming, working-out at New York Sports Club cookie cutter Long Island born and bred masses. It wasn’t ideal, but I find that theater is usually the best for opening day situations like these b/c you can line up super early and make sure you get a halfway decent seat. Then, I caught a Sunday matinee with my friend Lauren, who hadn’t been able to make it on Friday. Anywho, here’s my very non-Epert and Roper-esque review. WARNING: Spoilers ahead! 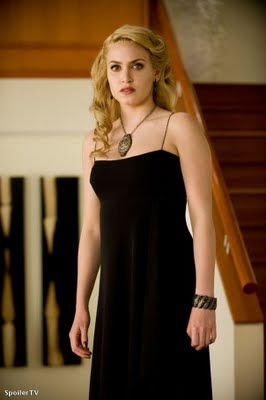 Let’s all pause and appreciate Nikki Reed who plays Rosalie for her general non-albinoness, BELIEVABLE blonde hue and nonSpice Girl outfits (just some of her major offenses in Twilight) in New Moon. Her wardrobe and beauty choices have improved by LIGHTYEARS. What do you think? I still don’t think she was an ideal choice for the role (Stephenie Meyer’s been quoted as saying she envisioned Olivia Wilde playing the part, which makes far more sense), but her Rosalie authenticity improved by 65%. I measured. 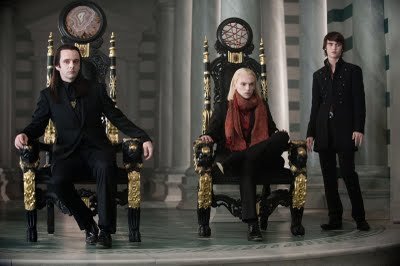 I’m into the Volturi. I thought the whole ancient ancient vamps with a mafia vibe was interpreted well on the big screen. I especially enjoy Aro, played by Michael Sheen, and his bemused tone. Especially when says, “Fascinating!” in response to the Volturi’s inability to affect Bella with their gifts. I laughed both times in the theater when he said this. His delight is just so… unparalleled, no? I find it hilarious. 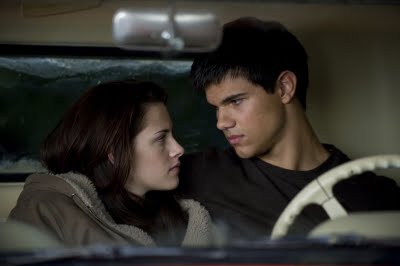 Let’s talk about Jacob Black, played by Taylor Lautner AKA Jailbait, as he was born in 1992. My gal Dina pointed out that Kristen Stewart and Taylor Lautner have much better on-screen chemistry, and I have to agree. I mean, how much shirtless Jacob was there in this movie? It’s not even to be believed. I posit that Bella’s feeling-up-of-shirtless-Jacob in her room (when he Spidermans in through the window) was improv slash involuntary. If those abs were within arm’s length, I’d have to “see what’s going on there,” much like she did. And his TEETH. Have you EVER? I could write a SONNET about his mouth alone. And yes, I’m quite aware that he’s like, 17. I’m totes cougaring out over him. A quote from my friend Lauren every time he rocked clothing: “Why is he wearing a SHIRT? I don’t understand.” 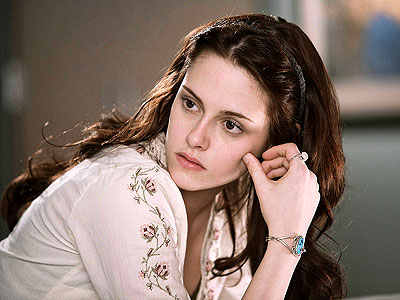 I thought overall, Bella, played by Kristen Stewart looked prettier than she did in Twilight. My one gripe is that her brows seemed a bit too skimpy. To me, it looked like a too-manicured interpretation of a well-executed wax. The idea was good. The shape was inspired. But too much brow was removed, leaving her face slightly unbalanced. 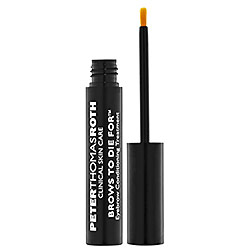 I’d recommend Bella invest in some Peter Thomas Roth Brows To Die For*. This fabulous serum, when swept onto brows nightly will ACTUALLY restore them to their former Brooke Shields (or at least Kristen Stewart) glory. I’m constantly complaining about my too-far-apart brows (they’ve always been like that my entire life–I have the OPPOSITE of a unibrow) forevs, and nightly applications of this miracle elixir has really stimulated brow growth. My brows are thicker, less sparse and elongated in a matter of a week. Get involved. Alice (played by Ashley Greene) looked delicate and fairylike and quite Audrey Hepburn in Charade (which I’m sure was the goal, especially in Italy). I absolutely loved Ashley’s portrayal of Alice’s distaste for Jacob. “I’ll come back. As soon as you put the dog out.” 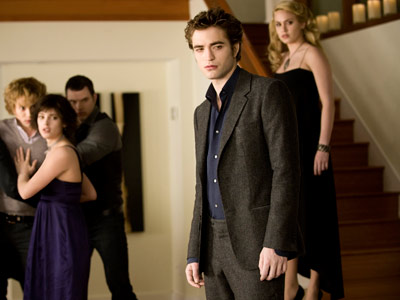 Jasper has removed his backbrace/lost his Edward Scissorhands tendencies. He didn’t have much of a role in this flick, but I’m glad he decided to play it a little less awk. 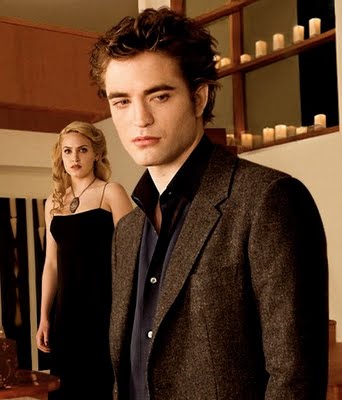 Lastly, Edward played by the beauteous of colossal proportions Robert Pattinson. Remember last year when I said that when he talks, “his voice is to die. I die. Everyone dies. Even he dies and then returns as a vampire for all eternity because it’s truly the love child of cashmere and velvet?” I’ve realized that it’s his voice and seeing the planes of his face in motion that does it for me. I barely even give a rat’s behind about him when he’s two-dimensional in photos. Weird, right? I think, however, if I were to see him in person, I’d probably blow a gasket or something.

And finally, I absolutely love this slideshow by nymag.com about the 34 ways New Moon the movie is better than New Moon the book. Missed my review of Twilight last year? Click here to read it.

What did you think of the movie? Better than Twilight? Worse? Tell me your thoughts in the comments.