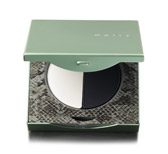 A few weeks ago, I attended a launch lunch for the fabulous Mally Roncal‘s newest products in her uber popular makeup line, Mally Beauty. There were tons and tons of fantastic new products which I’ll enumerate in a later post. But for the nonce, I must share about her
Mally Beauty 24/7 Professional Eyelining System* ($25).

Says Mally, “When liner and powder marry, the angels sing.” These “no fucking joke liners” (in the words of Mally) are like a tattoo. This stay-put liner lasts hours and comes in the deepest shade of navy. I love that it’s such a deep navy, it’s nearly black. In fact, it reminds me of that scene in Father of the Bride when Franck Eggelhoffer brings “nuffy blue tuxado’d” Mr. Baaannnks black thread. Remember? Observe:

That movie was genius, n’est pas? It had all the elements of succes: The fake Andrew McCarthy (played by George Newburn), pre-grunge 90s-ness, and wholesome family fun.

But anywho: Trust me on this liner. I do this for a lahhhving.