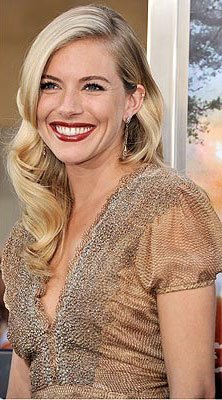 Sienna Miller looks gorge in CHANEL Beauté at the U.S. premiere of G.I. Joe: The Rise of the Cobra on Thursday, August 6 in Los Angeles. UM… I’m OBSESSED with this look. Thank baby Jesus the deets flew into my inbox courtesy of CHANEL Beauté this afternoon. Check it:

Makeup artist Kate Lee was inspired by the spirit of old Hollywood for the premiere at the Chinese Theatre. Sienna’s dress was a glamorous YSL silk chiffon encrusted with beads in a neutral colour.

Says Kate, “Adir Abergel and I wanted to create a look that would be
classical but modern. It was Sienna’s idea to go with a strong lip. I kept the rest of the make up very neutral, gently sculpting the cheek bones with a mixture of Soleil Tan de CHANEL and CHANEL Powder Blush in Tempting Beige.

The eyes were clean and simple to bring the attention to the lip. I
used CHANEL Éclat Lumière in Beige Rosé all over the lid and then shaded in the sockets with CHANEL Soft Touch Eyeshadow in Sand. I spent quite a bit of time on the brows to lengthen them, and after lashings of Exceptionnel de CHANEL in Smoky-Noir, I added both individual and cut up strip lashes.

The lips were a mixture of two CHANEL Rouge Allure shades, Fatale and Obscure, both launching this Fall.”