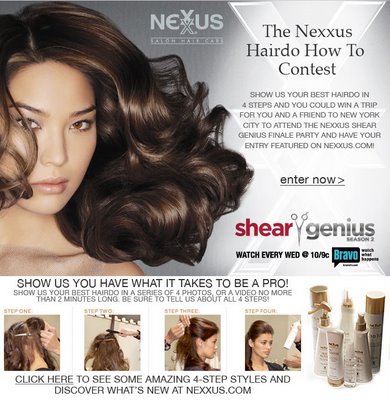 Nexxus is hosting a contest for one beauty maven to win an all-expenses paid trip for two to New York City to attend the Nexxus “Shear Genius” Finale party with the cast of Bravo’s hit show!

The second season of BRAVO’s hit reality competition “Shear Genius” is back and full of high-stakes styling action. On the July 16th episode, the show sponsor Nexxus Salon Hair Care, challenged “Shear Genius” contestants to create easy step-by-step instructions on how to style their model’s hair for judging. Now Nexxus wants viewers to get in on the competition with the Nexxus Hairdo How To Contest. The entrant with the best four-step hairdo will win the trip! Additional prizes will also be awarded. Enter or view and vote on the creative entries here.