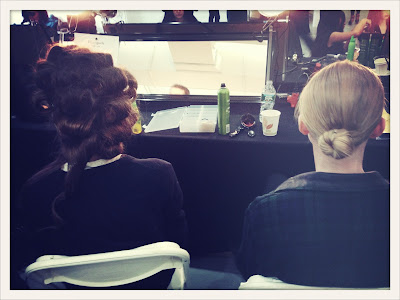 The inspiration for this season’s hair was a New York City 1970s party girl—super big, soft hair that is glamour-chic, and subtly sexy. Stylist Tommy Buckett suggests asking your mom if she still has her old roller sets because this polished glam look is as simple as prepping hair with Sky-Hi Volume Mouse and Hi-Rise Lift Root Booster, throwing in some rollers, gently brushing out the curls and finishing with a spritz of Garnier’s new 3-in-1 oil for hair, body and face.
And while most models had this big back-combed look, a few girls rocked a simple sleek bun that was shinny smooth thanks to the Sleek Finish 5-in-1 Serum Spray.  Middle-parted and tightly pulled back this look was polished perfection.
Makeup 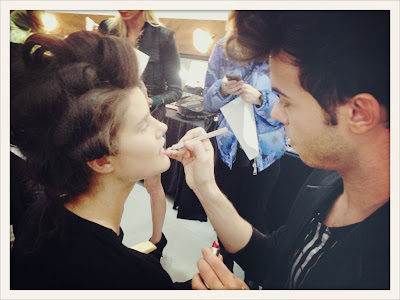 Makeup artist Neil Scibelli of Jouer wanted to create a wearable classic face that, with a few modern touches, could easily be recreated at home. Clean matte skin was paired with shinny lips and a classic cat-eye liquid liner. Brad Goreski playfully declared “No tranny lashes allowed,” so natural strip lashes added fullness but still kept the look very clean—apart from the liquid liner, the only other eye color came from a light smoky brown in the crease. Lips popped thanks to Jouer’s hydrating lipstick in Simone and were topped, seconds before the catwalk, with a glossy lip enhancer for a vinyl modern touch.
Nails 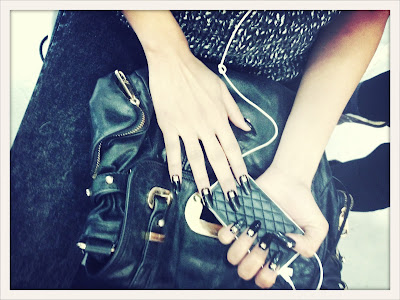 Deborah Lippmann knew that for Kate Spade nails = accessories so if the girls weren’t wearing a pair of super cute retro gloves, they had shinny long oval shaped nails that were complete with their own mini accessory: a pyramid stud.  The look came in two variations—an edgy black (two coats of Fade to Black) or a punchy pink concoction. Deborah created the pink by starting off with two coats of an opaque white lacquer called Amazing Grace, followed with one coat of I Kissed a Girl pink and a darker third fuchsia shade called Between the Sheets.  Both the black and pink nails were topped with the new gel lab top coat and adorned with a pyramid stud that was strategically placed an 1/8 inch above the cuticle, in the center of each nail.

What do you think of the look at Kate Spade?