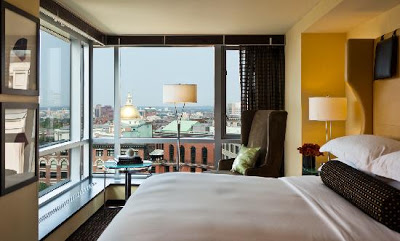 I’m in Boston right now with Gillette Venus, having toured the famous Gillette plant yesterday. Anyone who’s lived in Boston knows it’s The World Shaving Headquarters, per its dramatic signage out front. I went to Boston University in the late ’90s/early ’00s and let me tell you—I’ve been DYING to get into that factory since I saw the sign. I wanted to know what went on in there, to the point where 2001 me implored my friend whose father was an executive there for an internship. I was curious about all manner of blades of GLORY that were going on there (in those days, I was loyal to the Mach 3 for men, before technology for women improved). More on the tour later, but first, let’s talk about Nine Zero Hotel, where I stayed during the trip.
This beautiful boutique hotel is located on 90 Tremont Street in Beacon Hill. A favorite of Lady Gaga and Justin Bieber, the rooms are the perfect combination of plush, chic and inviting. After years of spending boozy nights on Boylston Street, it seemed almost comical to be a composed lady on that very  road, enjoying a professional delicious dinner at Towne. Check out a tour of the room below.
Call 617-772-5800 to book. What do you guys think of the room?