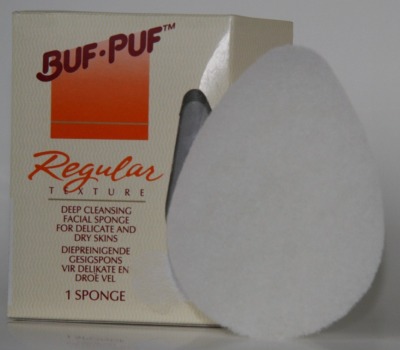 In the early ’90s, I washed my face exclusively with things that made my skin tingle (Noxzema, to be just like Rebecca Gayheart, Stridex pads and the like). But a few times a week, I needed to sand that shit DOWN, as it were. So I would save my babysitting money and buy a Buf-Puf pad (sometimes regular, sometimes the peach gentle version) once a month. It was only like $4, but you know. That was like, my allowance, practically.

I’d do a “face treatment” to myself using the Buf-Puf, then commandeer my brother’s face to see what a difference it made for his skin, following it up with Bonne Bell Ten-O-Six, naturally. He’d allow this in exchange for full monopoly over the TV, which is why I’ve seen every. single. episode of Star Trek: The Next Generation.

I got into the disposable single-use ones, too. That tear-shaped brillo pad of wonder was truly prophetic — it made skin brushes like the Clarisonic, Philips PureRadiance and Clinique Sonic System possible, much like how Diana Vreeland famously noted that Brigitte Bardot’s lips made Mick Jagger’s possible.