After seven years of reviewing mascaras for Rouge18, I’ve received my PhD in lashes.  I’ve written an entire encyclopedia of reviews and I’m now introducing report cards.  The mascaras will be given an A-F grade in the following categories: 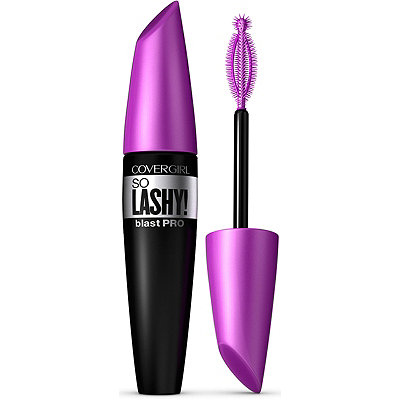 Packaging
Brush
Formula
Play-Time
Overall Effect
Touch-ups
Removal
The average of these categories gives you the ultimate grade. Start studying! First up is CoverGirl So Lashy! blast PRO Mascara.
Packaging: C
Classic Lash Blast tube shape with a purple top+black body. It doesn’t offend me but theres nothing special here
Brush: A
This brush gets an A on innovation alone.  With rubbery and spiky bristles, there are three wants that form a football shape with the empty space in the middle holding a well of product.  At the tip there’s a spiky ball to get to every last lash.
Formula: A
Dark and inky, this formula builds easily on the lash without clumping.
Play-Time: A
I was able to work the product to every lash from corner to corner, shaping my lashes without it
drying out.
Overall Effect: A
Two coats gave my dark, long, curled lashes.  There wasn’t tons of volume but my lashes looked fake!
Touch-ups: A
My lashes were still soft by midday so I was able to work more product into the roots to boost the effect for cocktail hour.
Removal: B
With such a black formula, I needed eye makeup remover to remove all traces.  Worth it for the look, hence the B.
This formula came off with soap and water, which is the ultimate lazy-girl goal.
FINAL GRADE: B
This above-average mascara gives great lash with a little tweaking. A great everyday mazzie.
—Ashleigh Ciucci
Follow Ashleigh on Insta.