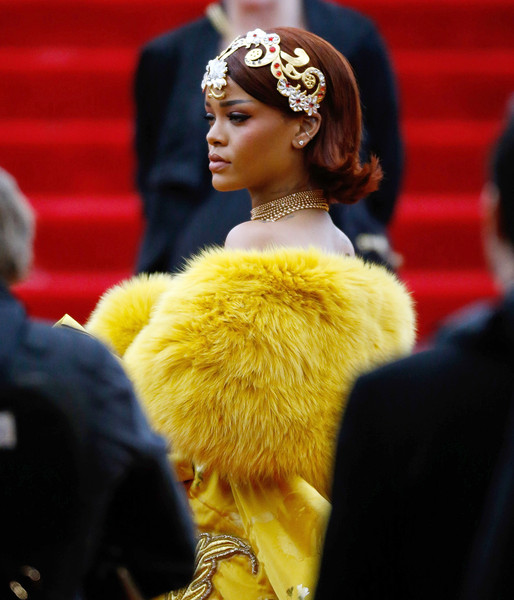 Mylah Morales created Rihanna’s stunning makeup look for last night’s Met Gala. “Our main inspiration for Rihanna’s makeup look came from two particular shoots that played on the  theme of the Gala : a 1958 shoot in Harper’s Bazaar by Richard Avedon featuring his muse the model China Machado, and also the model Fei Fei Sun photographed by Steven Meisel for Vogue Italia, January 2013 issue. I pulled makeup with an Asian-inspired color palette – lots of pinks – and used blush on her eyes and lips. The focus of the look were her very bold brows, and I used both the Diorshow Brow Styler to define and groom as well the new Brow Styler Gel for hold. For her complexion, I used both bronzer and two shades of the liquid foundation to contour and highlight for glowing, beautiful skin in all kinds of light.” Here, the beauty breakdown.
COMPLEXION

What do you think of this look on Rihanna? And what’s your stance on omelette dress-gate?