This weekend, I jaunted off to Vegas with my friend Michele and her friend, nicknamed Nuggets. The two of them live in San Francisco, which made for a less-than-smooth adjustment to west coast time for me.  One million games of Blackjack, one sub-par Britney Spears concert and enough Koi crispy rice to verge on mercury poisoning later, Michele and I barely made our flights back, while Nuggets was scheduled for a later flight. As I was finally ensconced in my seat on the plane a while later, I got the following text from him in our group chat. 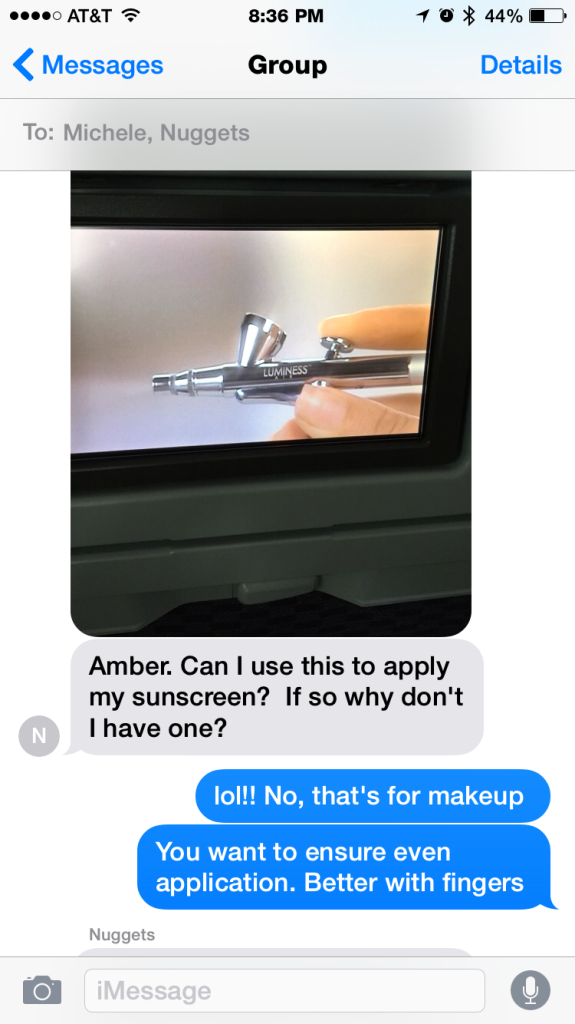 Some background on Nuggets: He is the most metro man I’ve ever met in my lifestyle (his hair and skin-care product knowledge legitimately rivals mine  — and beauty is my job) but he is not same-sex oriented. He is probably my Platonic soul mate. We have many in-depth talk about his skin care regimen, which includes gems from Skinceuticals and La Roch Posay. He is vigilant about sunscreen and as a result, looks at least 10 years younger than his 43 years, to the point where I nearly spat my soda all over In-n-Out Burger when he disclosed his age.

Because Nuggets is plugged in, literally, to all things technology, he was taken with this infomercial on the Luminess Air. For the uninitiated, it’s an airbrush makeup apparatus; a competitor to the Temptu. I admired Nuggets’ skin-care lifehack suggestion, but my instinct was that it was a bad idea so I told him, as you see above, not to invest in one. But then, I second-guessed myself and wondered if I had any idea what I was talking about. So I got my dermatologist, Dr. Neal Schultz on the phone to find out.  Dr. Schultz confirmed that I’m a “smart cookie,” and was right to advise Nuggets not to spray on his SPF. “It’s unlikely the machine can handle the viscosity of a moisturizing sunscreen,” he explained. “The application will also be too heavy on the skin. Sunscreen sprays are made to be sprayed, not lotions or creams. This is akin to pouring on an SPF without rubbing it in.” He also pointed out that the un-rubbed in sunscreen would yield a white effect, very Halloween.

So there you have it, friends! I was holding out that maybe Nuggets had discovered an innovative way of applying his products, but alas, it’s not to be right now. And Nuggets, kudos for you for asking the question!

And now, I want to hear from you: What’s your SPF of choice right now? I have separation anxiety if I stray from my Paula’s Choice Clear Ultra-Light Daily Mattifying Fluid. Share yours in the comments.

1 Comment → Can You Use An Airbrush Makeup Applicator For Skin Care?