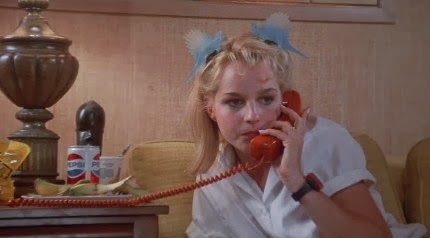 If you were alive and of sound mind in the ’80s, there’s no possible way you missed the ultimate dancing movie, Girls Just Want To Have Fun. Your only excuse could be toting a Y chromosome or living somewhere other than America (even on Guam”). Otherwise, you know the national treasure that was Lynne Stone, BFF of SJP, played by a young Helen Hunt. She rocked her Walkman to babysit, she drinks Tab, she adorns her ‘do with plastic dinosaur barrettes–the girl’s got style. In fact, in her words, “What [she] lack[s]s in substance, [she] make[s] up for in style.” What scent would she wear? Read on and find out.

Lynne is one of those deeply period characters who simply cannot be associated with a modern eau. No, no. She lives squarely in the ’80s, and she is so perfectly consumed with the zeitgeist that there is just no way she didn’t rock Exclamation. Yes, Lynne Stone absolutely made a statement without saying a word. On one of her trips to the mall (perhaps one where she harassed a young Drew Boreman getting a tux fitted) she definitely tried Electric Youth perfume when her idol Debbie Gibson was shilling it (the lip gloss too, obv), but she went back to her old powdery apricot blend. She, however, will never blend. She tells off Natalie Sands, she snags a killer VJ gig AND she’s a phenomenal wing gal. And that’s why she makes an exclamation in every sense of the word. What do you think Lynne would wear?

PS? You can still score Exclamation perfume on Amazon.com for $12.34.

In BBJ feature Fictitious Fragrance Fans, I assign a pop-culture character a signature scent. Fragrance is one of the most difficult areas of beauty to discuss and I find myself trying to convey a scent to you, more often than not, by the pop culture character it embodies to me. So why not make it a thing?