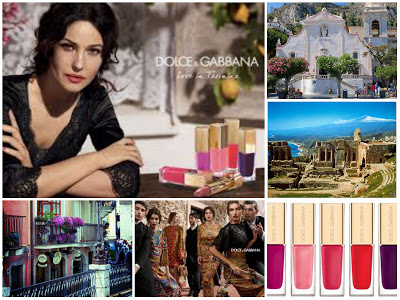 Perched on a cliff, overlooking the Ionian sea, the town of Taormina is undoubtedly one of the most beautiful sights in the world.
Sicily has spent most of its history under the rule of others–Roman, Byzantine, Islamic and Catalan, just to name a few. All these powers are infused throughout the island and Taormina’s romantic air is heightened by the architectural display of such history. Tiny medieval streets, a breathtaking view from the Greek theater and a Palazzo that was once an Arab tower was enlarged during Norman rule and then again by the Spanish before it became home to an important noble family in the 16th century.

The most recent powers tied to the town, however, are the fashion rulers Dolce & Gabbana. Almost always drawing on the island for inspiration, their latest collection of polishes is named Love in Taormina, and hopefully after that brief history lesson you understand why. This particular line is inspired by the flowers that punctuate the town:

The collection can be found at Dolce&Gabbana counters and on Sephora.com