Fictionary is a column showcasing beauty- and fashion-related words that don’t exist, but should. 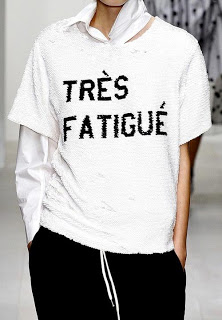 Today’s Fictionary word comes courtesy of Michelle Ricks (@EverAndWright) via Cannon Hodge, the super-savvy social media maven behind @Bergdorfs. When my gal Julia Dinardo (@FashionPulse) tweeted to me, “@Glambr can we work on coining a term that describes post-fashion week fatigue & indifference for all things… Fashion Week?” Cannon responded in one minute flat: Fashion Weak, coined by @EverAndWright.


After 15 backstage beauty crowded situations before the shows, 2 front of house extravaganzas (Tracy Reese and Michael Kors) multiple backstage interviews, a couple more crabby hairstylists and makeup artists than usual, one inspiration that set my world on fire (“Madonna on acid and having sex all over the place.” Courtesy of Tigi’s Nick Irwin, backstage at The Blonds, where they would later swan a FUR STRAITJACKET DOWN THE RUNWAY AND a Jack Nicholson’s FACE in “The Shining” adorned FROCK), way too many bagel-or-go-hungry situations, four deadlines and all my regularly scheduled workload, and not even having the luxury of having Valentine’s Day occur mid-NYFW when we’re all too flustered to notice, all I can think about is watching the first season DVD set of Parker Lewis Can’t Lose and ordering in Indian fare and going on a people cleanse for at least 24 hours.

That, my friends, is Fashion Weak.