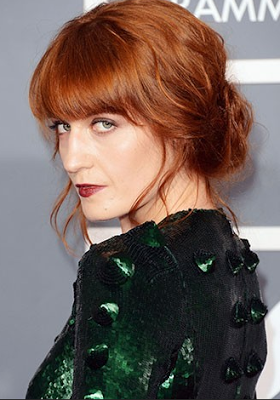 I’m pretty sure Florence Welch‘s musical stylings have become the harmonic equivalent of Sara Lee: Nobody doesn’t like them. I thought her makeup looked divine last night at the Grammys, created by   Lisa Aharon for Laura Mercier. According to Aharon, Riccardo Tisci of Givenchy, who designed Welch’s custom Givenchy dress, “had visions of a dark brown toned lip with the dress. Florence wanted a sultry eye, so I tried to marry the two.” The result was a fresh, glamorous red carpet look for the lead singer of Florence + The Machine. Here’s how to get the look.
LIPS
According to Aharon, the “rich brown lip” was Welch’s favorite part of her makeup look.
Aharon created Welch’s deep lip colour by first applying Laura Mercier Crème Smooth Lip Colour in Merlot ($26). She then applied Laura Mercier Lip Pencil in Coffee Bean ($20) “from the center of the lip outward, to avoid sharp lines and cool down the redness of the lip color.”
EYES
According to Aharon, Welch “wanted a sultry eye.” Aharon “added a little golden metallic shadow to the inner corner of the eyes to mimic the shine” of Welch’s custom Givenchy gown. Aharon first applied Laura Mercier Eye Canvas ($26) to the singer’s lids to create an even canvas and “hold the shadow all night long.” She then applied Laura Mercier Matte Eye Colour in Café au Lait ($22) around the entire eye, and blended it outward. Laura Mercier Sateen Eye Colour in Cedar ($22) was patted onto the center of the lid below the crease to “create dimension.” Aharon next applied Laura Mercier Illuminating Eye Colour in Gilded Moonlight to the inner corners of the eyes to “open them up and make them pop.” She then lined Welch’s lash line with Laura Mercier Eye Pencil in Special Brown ($20), and applied Laura Mercier Faux Lash Mascara in Black ($24) to the singer’s lashes. According to Aharon, “We didn’t use false lashes. Using this mascara is more than enough!”
FLAWLESS FACE
Aharon’s favorite part of the look was Welch’s “young, fresh and glowing skin.” Aharon first cleansed the skin and prepped it for moisturizer with ReVive Tonique Preparatif ($52).
She then applied ReVive Intensite Crème Lustre ($375) moisturizer to “combat dryness and provide radiance.” ReVive Les Yeux Presse ($175) was applied under Welch’s eyes to hydrate the delicate eye area.  Aharon chose the product “because it’s not too creamy under makeup.” Aharon highlighted Welch’s flawless complexion by applying Laura Mercier Crème Smooth. Foundation in Porcelain Ivory ($50) with a damp sponge. She concealed minor skin imperfections using Laura Mercier Secret Camouflage ($30). Aharon contoured Welch’s cheekbones using the NEW Laura Mercier Matte Radiance Baked Powder in Bronze-02 ($36 – launching April 2013). She finished the look by applying Laura Mercier Matte Radiance Baked Powder in Highlight-01 ($36 – launching April 2013) to the tops of the cheekbones.  Aharon stated, “I didn’t use blush, so I wanted a little something extra on the face.”
What do you think of Florence Welch’s makeup look at the 2013 Grammys?