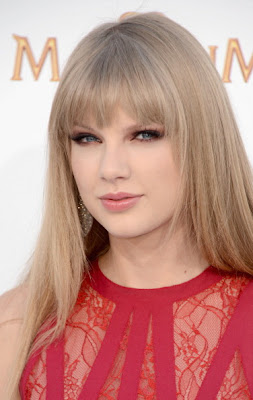 Taylor Swift looked criminally gorgeous at the 2012 Billboard Music Awards, so I had to share the scoop. Here’s the beauty breakdown, courtesy of Taylor’s makeup artist for the evening, Lorrie Turk. Lorrie stuck with COVERGIRL cosmetics to create this look. In Lorrie’s words:

“At the Billboard Awards, Taylor was being honored with Billboard’s Woman of the Year Award. With this in mind, Taylor wanted her look to be timeless yet still a little edgy and strong.

COVERGIRL NatureLuxe Silk Foundation was lightly applied using a damp sponge which ensures a light dewy application. I used a small concealer brush to sweep on a bit of COVERGIRL Fresh Complexion Under Eye Concealer to lighten up the under eye area, followed with COVERGIRL + Olay Simply Ageless Sculpting Blush lightly brushed along Taylor’s cheek bones to give just a touch of color and definition.

Because we went with a stronger eye look, Taylor chose to go with her lips fairly understated and neutral, so I added only a bit of sheer color and shine with COVERGIRL NatureLuxe Gloss Balm in Peony over her lips with a lip brush.”

What do you think of Taylor Swift’s sultry look?