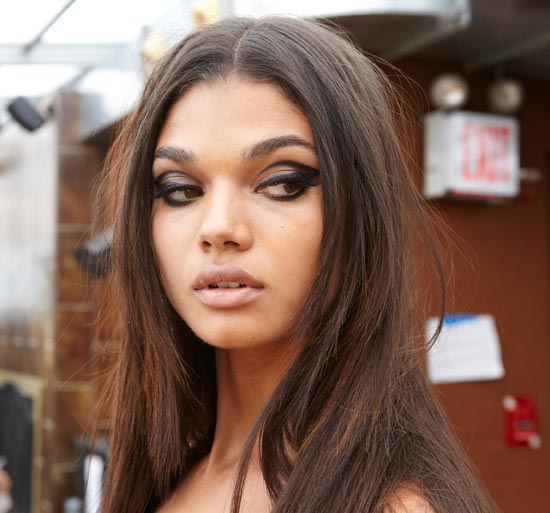 Odile Gilbert for Kerastase’s inspiration is London rock and roll. The hair was long and straight. The texture was achieved with a brush, not a flat iron. For oomph, mousse and hairspray were applied, while a little accent braid on the side was plaited in. Hairspray to set the look. “Always!” says Odile about the most-inhaled Fashion Week implement.

Charlotte Tilbury for Maybelline created a brilliant Sixties socket look. “Rachel and I want the girls to look Mick Jagger as a woman,” explained Charlotte. So she went for feline eyes, but a modern take on the classic. Skin was minimal–concealer applied where needed with a small amount of foundation. “We’re just gelling up brows,” said Charlotte. “Using the amazing Maybelline gel eyeliner in black, we’re defining the inner to outer corner in a classic sixties shape, along with the socket.” There’s no shadow here. Lastly, two sets of false lashes were glued on “to really give the eye a rock and roll vibe.” Lots of mascara to pop the lashes and a tiny bit of two bronzers, one matte, one shimmer were brushed underneath the cheekbones for architecture. As for lips, Charlotte mixed Maybelline lipstick in nude with a bit of foundation for a pretty, fresh lip. “It can work on any woman, any race, any shape eyes–it makes all of them look sexy,” Charlotte pronounced.

The opalescent nude nail look was created by lead manicurist for Zoya, Sunshine Outing. It was achieved using Zoya polish in Avery as a basecoat. Said Sunshine, “It’s a full coverage almond neutral opaque–it’s a two-coat cream.” Then, she topped the nails with Amina, a special effect opalescent sheer, which boasts a pink sheen. The combo came from Rachel Zoe’s polish concept for Superbowl Sunday.

What do you think of the look at Rachel Zoe?