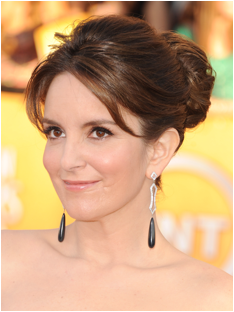 Gita Bass for Votre Vu created Best Actress in a Comedy Nominee Tina Fey‘s classic look for the 2012 SAG Awards tonight, using Votre Vu Skincare and Makeup. “We were inspired by Tina’s black strapless Versace gown. We wanted her look to be equally classic and sexy,” says Gita. Read on for the beauty breakdown.

Gita started by spritzing the face with Votre Vu Amour D’Ore Multi-Vitamin Oil for Face, Body and Hair. “It adds long-lasting hydration, primes for makeup and gives the complexion a gorgeous glow,” she says. Next, she applied Votre Vu Tragic Magic Rescue Creme to soothe and eliminate any redness.

Next, she used Votre Vu Sensational Eyes Eye Primer in Medium on the lids as a budge-proof eye makeup base. To prep her lips for color, Gita dabbed on the moisturizing Votre Vu Champagne Kisses Volume Enhancing Lip Balm.

Since Tina’s look shows a bit of skin, Gita generously applied the nourishing Votre Vu Snapdragon Antioxidant-Rich Citrus Body Drench all over. She followed up by spritizing Votre Vu Amour D’Ore Multi-Vitamin Oil for Face, Body and Hair on her decolletage and shoulders for an added sheen.

Finally, to set the look and create a radiant finish, Gita dusted on Votre Vu Mineral Powder in Light. “I also made Tina put the powder in her clutch so she can do touch-ups throughout the night” said Gita.

What do you think of Tina Fey’s SAGs look? I loved that dress on her!