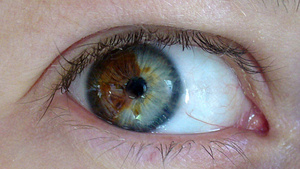 So when Roxette inquired so succinctly in song “What in the world can make a brown-eyed girl turn blue?” I wonder if they knew the answer was not a “what” but a “who”: Laguna Beach doctor Gregg Homer. Find out how after the jump.

He claims to have developed a 20-second procedure that can permanently change your eyes from brown to blue. And in a very Dr. Evil manner, he does it using lasers (not “lasers.”)

Homer says it’s possible because those standard-issue brown-eyed folk actually have blue eyes… they’re just masked by brown pigmentation. “We use a laser, and it’s tuned to a specific frequency to remove the pigment from the surface of the iris,” said Homer in a recent television interview. In the weeks following the procedure, the brown pigmentation is slowly shed, never to return again, allowing the eyes to appear blue.

And tell me: Would you make your brown eyes turn blue? Personally, I think this development is awesome. I loathe colored contacts–they always look like a computer screen. And why do I always feel like people who wear them can’t HEAR me?