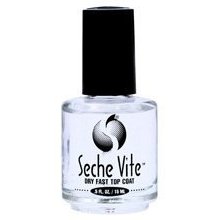 It’s 10:58pm and ALL you want is purple nails. The cinnamon red you’ve been rocking for the past five days is so over, it needs a new WORD for over, in the sage words of Carrie Bradshaw. You were planning on going to bed at 11pm. But there’s a Friends rerun.
You have an early morning, but you’re not going to have time to paint your nails again for another three days. And so, you fetch your base and top coat and get to work. You figure you’ll go to bed at midnight despite your early morning the next day. You’ll let your nails dry for an hour–that always is enough time at the salon, right?

Two words: Sheet marks. The next day, your Bedicure showcases a raised texture that someone at work charitably inquires about being “the new nail thing.” You know it’s not. More annoying than a nail trail and a  nail fail resulting from a cocktail is the Bedicure.The unfortunate thing? They’re in your future unless you leave two + hours before retiring for the night, as only the top layer of polish dries first, leaving underlayers still susceptible to “dints.” Many quick-dry polishes help a bit, but the one thing I find really speeds the process is Seche Vite Dry Fast Top Coat, a true Bedicure assassin. It’s a little pricier at $10 a bottle (buy it at Sally Beauty Supply for $8), but for high shine and manicure life extension. it’s so very worth it.