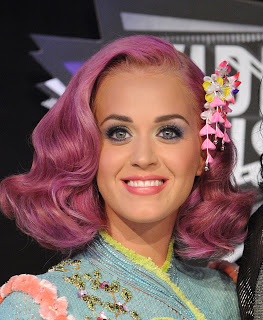 
Makeup
Says Jake Bailey, “The overall look was bright and fresh to play off her colorful dress.”  For more details and for the full hairstyle and makeup look Katy Perry wore at the 2011 MTV VMAs, read on…

I highlighted her cheeks with a coral shimmer blush and then finished the look with COVERGIRL LipPerfection lipcolor in Temptress, the perfect balance of pink and coral for lips that really popped.


Renato Camporo was inspired by a modern take on a 1940’s Hollywood look. To get the look, he began by creating a side part to the wet hair. He applied Fekkai Full Blown Mousse throughout the hair to build a strong and reliable base. Renato then blow-dried the hair using a round brush. Once the hair was completely dry, he used a ½ inch curling iron to add shape. After letting the curls cool off he allowed the curls to set for 15 minutes and then brushed through the hair. Renato used Fekkai Sheer Hold Hairpsrayto secure the look, adding a lasting finish and shine. To create the final touch, Renato took a one-inch strand of the hair and pinned it back with a vintage hairpiece, securing it with a bobby pin.


What do you think of Katy Perry’s VMAs look? And do you think she should have won the awards she did? Weigh in.