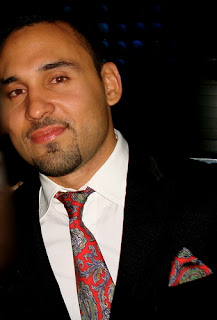 Personal trainer (and physical therapist) Joe Vega, trainer to the VERY buff Jason Backe. When Jason told me I had to get involved, I knew it was a must. Jason KNOWS trainers nearly as well as he knows how to create a creamy highlight concept. So how did I fare? Let’s start by saying that it was the most intense workout I’ve had in a LONG while and I do 3-4 sessions of Core Fusion a week, which is certainly not for the light of heart–mmkay?

I totally felt hard core, like the dudes on the Jersey Shore season premiere when they made sure to make the “G” in GTL a reality first thing once they landed in Italy. Among other things, Joe had me do some sets of what I can only describe as making a tsunami with ropes (much in the manner of Pauly D, conveniently! See below…)

Get More: MTV Shows
When it comes to the gym, shouldn’t our motto ALWAYS be WWPDD (What Would Pauly D. Do)? To round out the sweat sesh, I also lifted weights, did some kickboxing which I felt in my lower abs the following three days, jumped rope for the first time since I was a school girl, all while schvitzing more than I have in YEARS. The one thing about Core Fusion is that while it’s an intense workout, you don’t really SWEAT–and at least once a week, you just have to break a good one. I left pretty much embarrassingly soaking–but felt muscles I’d forgotten were part of my anatomy. I found Joe to be personable but firm; motivating but understanding when I needed a water break.
Joe’s monthly fees start at $447 per month (1-2 training sessions a week) for a 3-month contract, which includes a fitness assessment (a $200 value). If you choose to commit to a year contract, the price dips to $397 per month. You can further customize packages from there to suit your needs and even do group training sessions with two of your friends. To boot, Joe will be offering promotional items like Lululemon gift cards, haircuts at Ted Gibson Salon, discounts at Energy Kitchen and Soul Cycle Spin Classes.
Interested in training with Joe? Email him at joseph.vegapt[AT]gmail.com or tweet him up on Twitter–his handle’s @fitnflyjv.