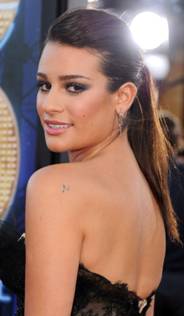 Lea Michele had a good reason to skip the 2011 Teen Choice Awards on Sunday–she and her fellow Glee castmates were out in full force the previous night at the Los Angeles premiere of Glee: The 3-D Concert Movie. Dove Celebrity Stylist Mark Townsend created a glam ponytail for Lea’s big red carpet moment, where she celebrated her first time appearing on the big screen. Read on for Mark’s how-to for recreating Lea’s summer-savvy ponytail.

“For the Glee: The 3-D Concert Movie premiere, I was so inspired by Lea’s gorgeous Marchesa dress and its texture–I wanted Lea’s hair to have the same texture. It was a pretty humid evening in Los Angeles so I wanted I make sure that Lea’s straight ponytail would not frizz, so I started her style by applying a few drops of Dove Nourishing Oil Care Serum to her damp hair from root to ends and combed through to make sure the serum was evenly distributed. The almond and coconut oils in the Serum absorb into the hair instantly, leaving the hair smooth without weighing it down or making it look greasy. Next, I blow dried her hair with a large round brush and dried her fringe back, too. To give the hair shine and texture, I ran a small amount of Dove Nourishing Oil Care Leave-In Smoothing Cream through her hair and gathered it into a tight ponytail. I finished by giving her style a final spray of Dove Extra Hold Hairspray.”

It’s a bit of a departure for Lea Michele, but I like its sleek, sophisticated sensibility. A little Robert Palmer “Simply Irresistible” girl lite, n’est-ce pas? What do you think?