Is there anything more awk than cheating on your stylist (Matthew Fugate) IN his salon (Sally Hershberger Downtown) WHILE he’s there? My promiscuous hair and I did exactly that when I’d arrived for my Dove blow-out appointment with famed stylist Mark Townsend, who, by the BY, has tended to the locks of one Miss Jennifer Lawrence, whom it’s just been announced will play The Hunger Games‘ KATNISS EVERDEEN. KATNISS AND I HAVE HAD OUR HAIR CUT BY THE SAME PERSON. Sorry, I realize there’s no need not to use my inside voice. Anyway.

See, when I need a haircut, I get like the dude who can’t stop talking about Frank’s planet in the too-short-lived ’90s MTV animation series, Liquid Television. Except my Rain Man-levels of discussion topic is my hair and how it needs to be cut, as opposed to the dude traveling to Nerp (evidently), who is having major Frank Separation Anxiety. Watch the short, called “This Is Not Frank’s Planet,” below. Read more… 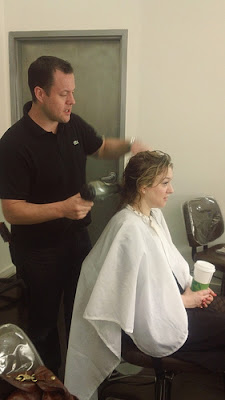 Did you ever watch Liquid Television? It’s one of my all-time favorites; it’s where Beavis and Butthead started. I ESPECIALLY respect people who watched it regularly, as they’re few and far between. My brother and I watched it religiously. Fun fact: New York Times Critical Shopper column writer Cintra Wilson did the voice of the “Winter Steele” short.

Anywho, my cut with Mark? It looks #Apausemazing! And I couldn’t be more thrilled. He also used new Dove Nutritive Therapy Nourishing Oil Care Antifrizz Serum ($6), which is so fantastic, I’ve been using it on my wet hair and letting it dry into glossy waves sans involving heat tools. And I was lucky re: the cut, as there’s always a chance if you take on a new stylist, even a celeb one, that they’ll give you a bob when you asked for a “dusting” of your long locks.