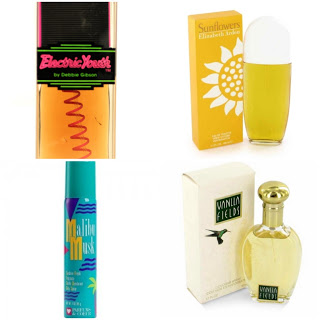 Today, somehow my mind drifted to the disgustor perfumes I used to rock before I knew better. I got to thinking about how spritzing myself with a spray of a CAN of Malibu Musk just seemed to be the height of sophistication when I was 11. Chances are, if you invited me to your sleepover party or bat mitzvah, I celebrated by dousing myself in the eau de ew before showing up. I decided to ask my Twitter friends (twiends?) and Facebook peeps who weighed in. Some answers are hilarious. Especially Patrice Grell Yursik, who grew up in Trinidad and told me all about a British brand’s fragrance she wore called Black Velvet by Yardley. Which naturally made me think of one of my favorite drugstore jamz, Black Velvet by Alannah Myles. Dolls, you’ll want to do yourself a favor and read on…


Story time! Do you KNOW the wild goose chase I went on in 1998 to secure that tune on CD, as it wasn’t produced after the early 90s? I finally ordered it on a mail-order compilation ’90s Style album of particularly hilar ’90s songs (also included was Snow by Informer and Walk on the Ocean by Toad the Wet Sprocket). Anyway! What was I talking about? RIGHT. The hilar list of scents of yore. Here they are, broken down by beauty editor/blogger/friend/Twitter name (if it’s someone I don’t know).


Beauty MVP
I used to rock CG Navy! I can’t stand the way it smells now! But I did like the bottle shape


Andrea Lavinthal
Scratch that. Most embarrassing was Revlon Ciara which made me smell like a seasoned stripper so obviously I bathed in it.


beautypr_kamilla
I think it was called Tribe sold in drugstores


Courtney Dunlop
Not Love’s Baby Soft, but the weird blue one that came with it . [I pointed out it was Rain Scent, which, naturally, smelled not one thing like rain.]


Paula Wade
I’d almost have to say Benneton “Colors”, but “Tabu” is up there, too.


Colleen Williams
Besides Incognito, Exclamation, and Navy – I’d have to say Heaven Sent. Or… Hello Kitty from this past year at Sephora!!


Rachael Kelley
And let us not forget exclamation. My fancy fragrance at that time was Red by Giorgio. NOT the Imposter, thank you very much!


Jenn Buentello
ELECTRIC YOUTH by Debbie Gibson. Carried that shit to school in a denim purse, too!


Michelle Mismas
Actually how could I forget the bottle of Yo Rap Musk I bought at the grocery store because of the ridiculous name & packaging. The cap was a tilted hot pink baseball cap. And yes I wore it. Like Karen Walker I smelled of gin & regret.


Christine Mikesell
Oh, and mine is definitely Electric Youth, which I didn’t buy for myself, but borrowed from a friend and “forgot” to return.


Kristen Kelly
I think I’ve worn every scent mentioned here, including Yo Rap Musk, which I lovingly called Rat Musk (and still wore). I also went through an old-lady-perfume phase during which I wore old Coty scents like Emeraude. I was 11.


Tamar Anitai
I also had a HEINOUS bottle of Colors d’Benetton. It smelled like disinfectant.


Patrice Grell Yursik
OK. I love that this is a space of no judgment or shame! Trinidad being a former British colony, imported lots of pop culture, food and cosmetics items from the UK and not the US. So I grew up reading books that many of my American friends have never heard of (for example, anything by Enid Blyton: http://en.wikipedia.org/wiki/Enid_Blyton) and our embarrassing 80’s/90’s perfumes were all made by a company you may have heard of, called Yardley. Back in the day I was OBSESSED with this particular scent:

Ob. Sessed. I feel so much better, now that I shared that!


Aly Walansky
debbie gibson’s electric youth! and i wore it for YEARS


Hilarious! And tell me: What’s your most embarrassing scent of the 80s or 90s?

8 Comments → Which Perfume Of Yore Embarrasses YOU The Most?