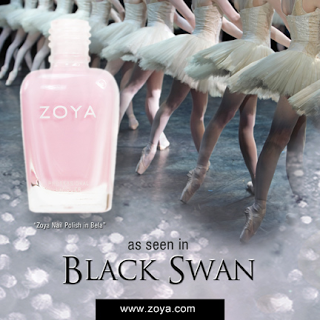 Per a press release from Zoya, growing up in the Soviet Union where ballet is hugely popular, Zoya, the woman behind the eponymous brand dreamed of being a ballerina and dancing to Tchaikovsky’s Swan Lake. Many years later, that dream came true, though altered, a bit.
In the movie Black Swan, early on in the film as the lead dancer, Nina (portrayed by Natalie Portman), prepares in her dressing room for a gala where she will be revealed to the masses as the new Swan Queen, a solitary elegant bottle of  nail polish briefly flashes across screen. The bottle shown is Zoya Nail Polish in a delicate shade of pink named Bela.
Zoya Reyzis (founder of Zoya Nail Polish) and the Swan Queen of Swan Lake, together at last, albeit in a different capacity.
Zoya Nail Polish in Bela is available at zoya.com.