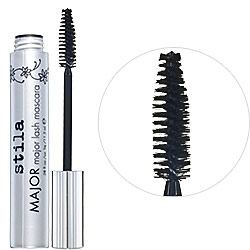 Now, this mascara delivers on its promise. With a giant tapered brush and a black black formula, I got MAJOR lashes. The product is wet enough to deliver pigment from the roots to the tips, but thick enough to actually build volume. After just one coat, it rivaled most other mascara’s second or third coats. The roots of my lashes were dark and dense and the tips were fluffy and flirty.

With a second coat, it brought serious volume and I had to be careful not to go overboard and turn into Tammy Faye. Midday, while a bit of the density had waned, I was able to pump it back up with an additional coat.

The only minus is that I had to take it off with makeup remover, but it was totally worth it. I would most definitely buy this mascara and use it on the regular!