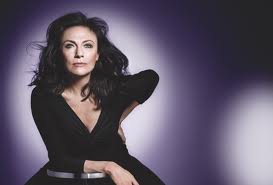 It’s not every day Carol and I both get invited to an epic luncheon, but that’s just what happened recently, thanks to Avon and their new Avon ANEW Platinum Collection launch. The ever-so-mage actress Jacqueline Bisset is the face of the the new skincare line for women 60+ from Avon’s pioneering ANEW line. It was developed to recapture the appearance of youthful contours and will debut this fall through Avon Representatives. 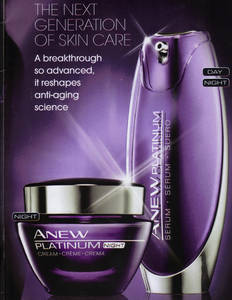 Because this is an anti-aging item geared toward women 60+, naturally, I deployed Carol to test out the products themselves. Carol works on her own schedule, of course, so she has finally gotten back to me with her review, which she dictated to me over the phone, as she hasn’t yet mastered email. She’ll be sending her first to Avon social media rep Casey Carter tomorrow in the form of a thank-you note, she informed me. Without further ado, here’s Carol’s review:

The Avon ANEW Platinum Serum is different from any other serum I’ve used. Most serums have a thinner quality, this one boasts the heft of a moisturizer. It retains that sticking quality of moisturizer as well–even up until the point I wash it off. It also has staying power, I almost feel I don’t need a moisturizer over it, though of course I apply one on top of it anyway. My one qualm is that it does have a rather strong scent. Not a bad one, but a little middle-America tooty-frooty cold creamy fragrance. It’s not unpleasant, but it does come on a bit strong. I’d forgotten about that ambiance of eau de Pond’s. Suddenly I’m transported to the 1950s, when that was the only scent going. It’s reminiscent of Evening in Paris or something. A pronounced perfumy fragrance. You know. But I love how well it hydrates, thanks to its remarkable adherability.

3 Comments → Carol And I Are Ladies Who Lunch–With Avon And Jacqueline Bisset, Obv.