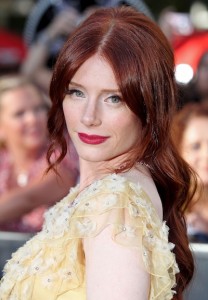 Remember I was JUST wondering about BDH’s glamazing lipstick at the LA premiere of Eclipse? Well, wonder no more: I just got the deets from CHANEL Beaute. Here is the makeup breakdown of Bryce Dallas Howard‘s makeup look at the premiere of The Twilight Saga: Eclipse:

“Bryce’s skin is milky perfection and her hair a deep auburn, so I wanted
to avoid doing the expected, and decided to go for a bold lip.”
“Her skin was prepped with CHANEL Hydramax + Active Serum, and then I applied a mineral foundation. Her cheeks were CHANEL Powder Blush in Imprévu, which is a great mix of rose and bronze. I lined the eyes with the new CHANEL Intense Eye Pencil in Clair, and then went over the top with a
pale pearlescent peach shadow from the new CHANEL Quadra Eye Shadow in
Enigma to reflect the light. I then applied two coats of CHANEL Inimitable Intense Mascara in Noir.

On her lips I used CHANEL Rouge Coco Lip Colour in Cambon which I matted down into a stain. I used the clear CHANEL Brow Shaper to set her brows in place, and then off she went to the craziest premiere of the year! The fans had been camping out for a few nights already!”

The look is a total win for BDH! What do you think?