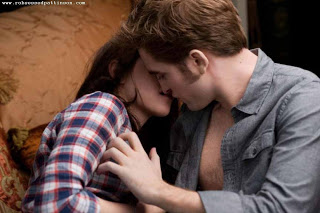 Dermalogica was chosen as the exclusive skincare brand by The Twilight Saga: Eclipse lead makeup artist Charles Porlier. In addition to being a lifelong devotee to the brand, Porlier relies on the products to deliver superior results to his clients, without causing skin irritation or jeopardizing makeup’s application. Want to find out what post-shave salve Charles was using on Robert Pattinson‘s mug? Read on.

Porlier would start the day by using Clearing Skin Wash ($33) on every cast member. Because most actors were in their acne-prone years, he wanted to start off the day by treating their skin with salicylic acid to keep breakouts at bay.

Following a cleanse, he’d mist Soothing Protection Spray ($32) all over each actor’s face and neck to eliminate travel-induced dehydration.

Active Moist ($52) was Porlier’s top pick for universal moisturizer, because it effectively hydrates skin without leaving a greasy film behind. He found it particularly useful on cast members playing vampires, because their skin needed to look naturally chalky.

Porlier relied on Post Shave Balm ($26) for Robert Pattinson, Taylor Lautner, and the other male cast members as a “pre-makeup for oily skin”. It not only moisturizes and soothes irritated skin, but it also provides a smooth, non-greasy finish (something very important to all the male actors!).

To prep skin for heavy makeup, Porlier and his team would generously apply Body Hydrating Cream ($46) to the arms, abs, and legs of Lautner and his Quileute wolf pack members. The makeup team would use such heavy makeup to enhance their natural muscle tone, but this would often cause irritation when removed. The cream would protect against the assault of removal, and the team would use it again afterwards to keep skin hydrated and calm.

To remove the cakey white makeup used to make the vampires look pale, Porlier and his team would rely on Precleanse ($34) to remove every last smudge of makeup. The cleansing oil works by liquefying sebum and oil-based debris (including makeup!) from the skin’s surface, so a cleanser can, in turn, work more effectively.

At the end of every day, if cast members were in a hurry to leave the set, Porlier would send them away with a warm, moist towel saturated with UltraCalming Cleanser ($33) to remove all traces of makeup (including eye makeup) on the go. The gently, non-foaming cleanser contains lavender to soothe, coneflower to calm, and cucumber to cool irritation.