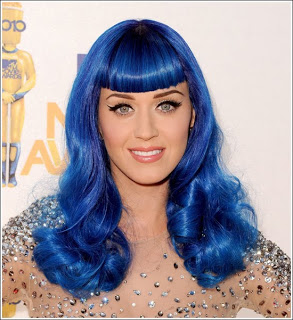 Katy Perry‘s Wonder Woman retrospective makeup and hair look last night at the MTV Movie Awards 2010 rocked the funk, in my very profesh opinion. Her makeup was done by the fabulous Jake Bailey, makeup man extraordinaire. Here’s the makeup breakdown, in Jake’s words:
The wig was definitely the focal point of the look so we wanted to balance that bright color out with a dramatic glamorous eye and keep the rest of the colors nude. She wanted a polished chic look. For her face I used Makeup For Ever HD Foundation followed by COVERGIRL Simply Ageless Sculpting Blush in Plush Peach to give her cheeks a warm glow.
On Katy’s eye I used COVERGIRL Line Exact in Black. I love liquid liner because it allows you to change the shape of an eye, we wanted to create a more almond shape for Katy. Above the black liner, I used the white shade of the COVERGIRL Smoky ShadowBlast in Onyx Smoke. In her waterline I applied new COVERGIRL LiquiLineBlast in Silver Spark to make the eyes pop. Women tend to be afraid to use liner in the inner eye but it actually balances out a dramatic eye look. To finish the eye I applied multiple coats of COVERGIRL LashBlast Fusion in Very Black. On her lips I used COVERGIRL Outlast Lipstain in Flirty Nude and applied LaMer Lip Balm on top for a touch of shine.
Before her performance I punched up the look a bit by adding COVERGIRL LiquiLineBlast in Blue Bloom for a pop of color and COVERGIRL Outlast Lipstain in Everbloom Kiss. Katy loves the Outlast Lipstains because they are great for when she performs; they don’t stick to her hair or microphone and never smudge.
What do you think? Fabulous or too too?
Image Credit: celebutopia.net