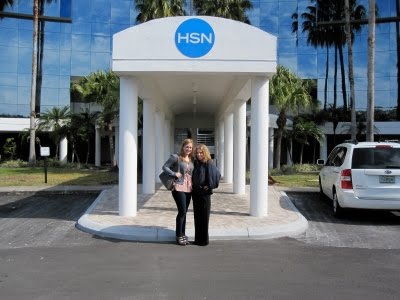 Karen and I in front of HSN!

Gals, last week, I got a chance to get a behind-the-scenes tour of HSN, thanks to the fabulous Karen Robinovitz from PurpleLab. She’s presenting her double-duty beauty line for the network at 9am today, February 18 (and February 19 at 12pm and 7pm) with host Amy Morrison. 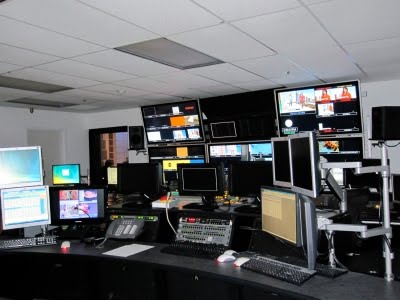 First of all, in Tampa (Glampa, when I’m there), the culture IS HSN. It plays everywhere, 24 hours a day. The Tampa Hilton plays the network on a loop. There’s so much to every single second that goes on air on HSN (mind you, it’s a 24/7 LIVE operation) that a casual viewer would never pick up. Every presenter is briefed vis-a-vis what’s legal to say on-air and what isn’t. For instance, the words “free radicals” don’t fly.

Many on-air presenters are trained by the “father of home shopping,” Bob Circosta. The man is ubertalented and teaches his disciples about the art of WISGAT, which stands for What Is So Great About That–meaning, presenters need to discuss each HSN product as a solution to a targeted problem for maximum audience identification and then identify exactly “what’s so great about that.”

Also: The most important word when presenting on HSN is YOU. HSN’s hosts are trained to address each camera as if they were guests seated at a dinner party. So maybe that explains why I’ve been sucked into hours upon hours of shows featuring things I’m barely interested in. Don’t act like that hasn’t happened to you.

I learned that the hosts and presenters are constantly given a stream of feedback via a tiny earpiece that Karen liked to point out is very 24. It’s invisible, but allows for producers to tell you which camera to look at (Bob advises that you look at it as if it’s the third person in the room) and to keep you on target with your messaging and make sure it’s all within HSN’s legal parameters. It’s a lot to keep track of when you’re on the fly! They make it look so easy. 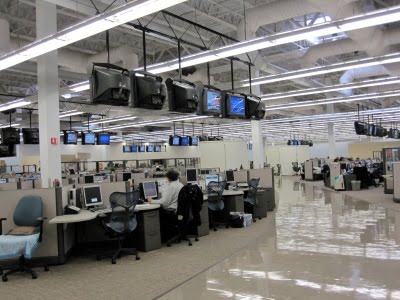 The company’s culture is fascinating. In a very 1984 fashion, much communicate happens via television sets. They feature messages ranging from a silver bracelet was found on the 4th floor bathroom to item #209845 is sold out. I found the staff’s corporate cheeriness to be genuine. I attribute this to their GLAMAZING cafeteria. No joke: Best scrambled eggs I’ve ever consumed. Karen and I considered coming there to eat should we wind up in Tampa for any business, HSN or otherwise. 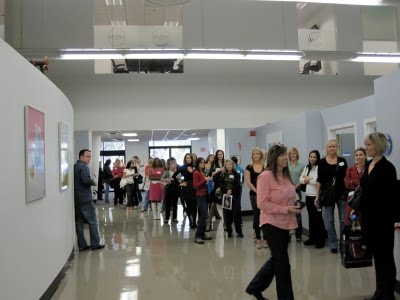 THIS is the insane line of models who came for the PurpleLab casting call. It was all VERY ANTM! 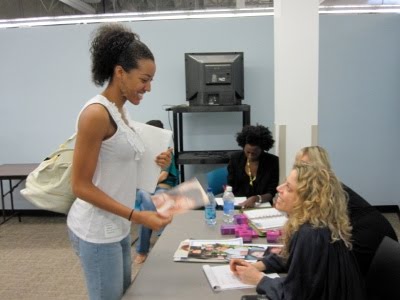 Karen at the model casting call, interviewing one of the models chosen for before and after.

My favorite part of the trip? Karen held a model call to choose models for her on-air makeovers and before and after photos for the site. In the end we chose a fantastical group of gals ranging from age 20 to early 50s who embodied the PurpleLab energy. The four ladies we chose were fantastic! I even did befores and afters with them. Can’t wait for my HSN debut! 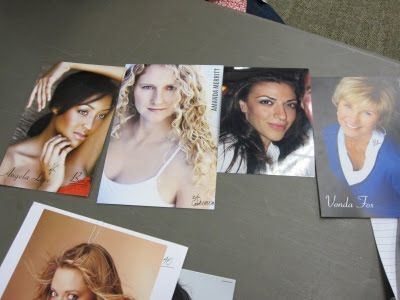 The cards of the models we chose for befores and afters!

You NEED to see what PurpleLab can do for you. While at HSN, I became deeply enamored with the Silk Sheets Foundation (infused with skin care ingredients like) and Cheek Implants Cream Blush complete with collagen (I’m partial to Six Inch Heels, a suits-all-skin-tones pink). Want to get involved? Buy PurpleLab now on hsn.com. 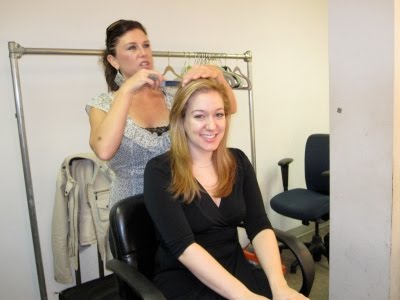 Getting my hair done with makeup and hair artist Deanna Hawk for befores and afters for HSN. 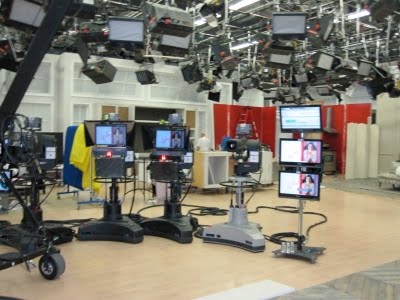 A room where they watch the action happen! 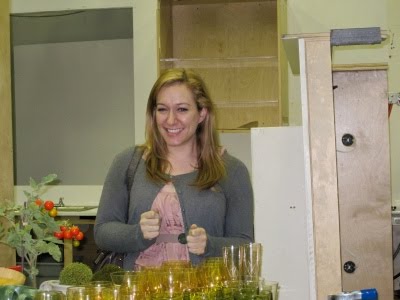 That’s me, posing on one of the kitchen sets, likely used by one Mr. Emeril! Bam!

What about you? Are you an HSN junkie? I’ve been known to get lured into hours of Adrienne Arpel. Tell me YOUR HSN story in the comments. And don’t forget to watch Karen today!