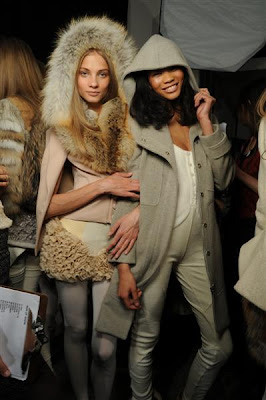 The Thakoon Fall 2010 Collection was inspired by ’80s/’90s dance troop Chopinot & Gaultier’s Le Défilé. “I was inspired by the costumes used in this show and wanted to create a collection that reflected that same era but without the goth element,” said designer Thakoon Panichgul.

NARS Cosmetics created the makeup look. “The look is fresh, beautiful, luminous and quite confident,” said lead NARS artist Diane Kendal about the look. “We focused on a strong brow and highlighted the eyes to show depth and boldness in a way that wouldn’t fight with the various textures, layers and colors of the collection.”

Eugene Soleiman lead the hair team, who used Wella products. The look was a “destroyed blowdry,” and was created by curling random sections of hair among straighter pieces, then shaking a ton of baby powder into the main for a matte hair effect.

What do we think? I’m disappointed by matte hair (matte anything other than lipstick and eye shadow tends to upset me), but the makeup look is pretty in its simplicity.