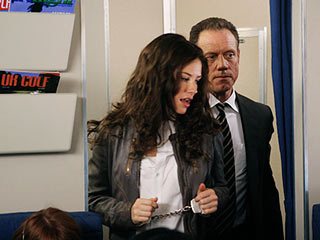 I’m totally into LOST Season 6 just based on the premiere, LA X Parts 1 & 2. Damon Lindelof and Carlton Cuse promised a new device would be introduced this season, and it is flash-sideways. To me, it seems reminiscent of the multiple Doc Browns in Back to the Future. I also consulted with LOST superfan Ethan Katz (my brother) on many things. Like, during every single commercial break. Here’s why: Ethan is OBSESSED with comic books the way I’m obsessed with beauty products AND he majored in Philosophy. The three major themes I identified for this season thus far are comics, philosophy and biblical references–specifically the Jacob/Esau story. More on that later.

Some things I noticed in no particular order:

The beginning stunner scene shows us a parallel world where the LOST island is underwater, a reference to Atlantis, the lost island.

The name: LA X is a reference to Earth X. We could use the same terminology, i.e., there’s a Jack X and conversely, a Jack Prime.

In Would’ve World (meaning the alternate flash-sideways world, coined by Ethan), Kate Austen has a most covetable cat-eye. Imma investigate that, don’t you worry.

Fear and Trembling by Soren Kierkekard is found in the cave. INTERESTING. Here’s why: The work begins with a meditation on the faith of Abraham when he was commanded by God to sacrifice his son Isaac. My friend Dave made the AWESOME connection that this Spy vs. Spy (more on that below) tale of two opposing spirits of good and evil is totes a throwback to the biblical story of Jacob and Esau. Jacob and Esau are Isaac’s sons. Per Dave, “Esau vowed to kill Jacob for stealing his birthright but could not because Jacob tricked his father Isaac into blessing HIM, not Esau. So Jacob had the protection of God. At the end of the episode, Sayid’s body was blessed [in that crazy version of a Roman spa day–remember?] so Jacob could enter. In the bible Jacob had a dream of a temple with a ladder that stretched to heaven–‘Jacob’s ladder.’ I think the temple on the island is Jacob trying to build his vision.” Sounds pretty right on, what do you think?

A Lazarus Pit is something I was alerted to by Ethan. Per Wikipedia, a Lazarus Pit is a fictional natural phenomenon in the DC Comics universe. They are primarily found in the Batman titles and are commonly used by Ra’s al Ghul for their restorative powers. Lazarus Pits were accidentally discovered by Ra’s al Ghul in an effort to cure a dying prince of the Sultan he worked for. Ra’s al Ghul dug a pit where he discovered the restorative chemical pools that he dubbed a Lazarus Pit for its abilities to heal those at death’s door. Hello? Is that not EXACTLY what went on with Sayid in the Spa Day From Hell?

Spy vs. Spy is a comic book about 2 spies, one black and one white (again the black/white/dark/light theme) warring against each other, symbolic of the Cold War. The Jacob/Man in Black (Fake-ob/Gangsa Locke) dynamic is VERY reminiscent of this. But interestingly, the two spies can (and do) kill each other all the time. On LOST, they have to have others kill one another.

More sadness surrounding the deeply upsetting story of John Locke. How awful that his last thought was, “I don’t understand.” He continues to be a pity-inducing character of Balzacian proportions.

Interesting that Shannon did not leave Australia with Boone in Would’ve World.

WHY did they bring Juliet back despite the very dignified ending they gave her in the finale. Is it only to use her as a vehicle to say “it worked.”?

FINALLY, some plot about CINDY and the kids.

What chains was Richard Alpert, i.e. Eyeliner Richard in, per Gangsta Locke’s comment? The chains of love?

Coming back to life was a smaller theme: Charlie on the plane; Sayid on the island.

Hurley has great luck in Would’ve World, quite the contrast to his being plagued by The Numbers in the real world. Hilarious: “I won the lottery and I like chicken so I bought Mr. Cluck’s.”

In Would’ve Word, Locke has no faith, Jack is an optimist: The two have engaged in a complete role reversal.

An excellent point from EW.com’s Doc Jensen: One wonders if the entire season 6 side ways story line will model the general thematic thrust of the castaway story, but with different incidents and events — a gritty, more down-to-earth version of the mythic, larger-than-life Island epic, like how Dorothy’s adventure in Oz was a fantastical extrapolation of her life in Kansas. I’ve talked about the similarities between LOST and Oz before here.

Well. This is the longest post ever. It seems I was LOST-starved. Anywho. Please comment away with your theories. And here’s to hoping Carlton Cuse and Damon Lindelof will do the Christian (Shepard) thing and give a gal some answers.