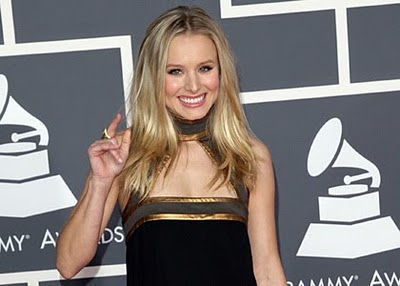 Though I wasn’t a fan of her dress, I did love actress Kristen Bell‘s makeup at last night’s 2010 Grammys. Below, mark celebrity makeup artist Mai Quynh explains how she created Kristen’s gorgeous red carpet look. And PS, mazel tov to Kristen on her recent engagement to my pal Dax Shepard! Here are the details on Kristen Bell’s 2010 Grammys makeup look.

“For Kristen’s face, I first applied mark Calm & Composed Super Soothing Moisturizer followed by mark Face Xpert Flawless Touch Makeup in Buff using the mark Foundation Brush. To cover any redness, I used mark Good Riddance Hook Up Concealer in Fair/Light and mark Get Bright Hook Up Highlighter in Light underneath her eyes. I then set her foundation by brushing on mark Matte-nificent Oil Absorbing Powder in Nude Ivory using the mark Powder Brush. As a final touch, I applied mark Good Glowing Mosaic Blush Custom Color Palette in Sandy to the apples of her cheeks to create that natural looking glow.”

“I wanted to make Kristen’s eyes the focus of her face, so I started by smudging mark Eyemarker Color On Line in Jet along the top of her lash line using the mark Eyeliner Brush. I extended the liner outwards so that it looked like a smudged cat eye. I then mixed I-mark Custom Pick Eyeshadows in Tiki and Magic and lightly dusted onto her lids, using the mark Angled Contour Eyeshaodw Brush to soften the edge by blending it back and forth. I then used two coats of mark Lash Splash Hook Up Waterproof Mascara in Black on her upper and lower lashes.”

“For her lips I used mark Glow Baby Glow Hook Up Lip Gloss in m.powerment Peach.”

What do you think? Is it a win or a miss?