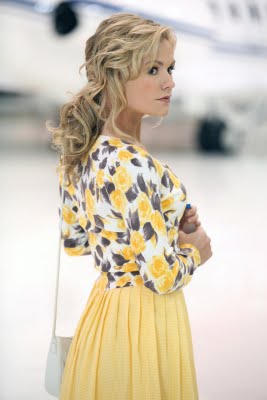 Second generation makeup artist (and total doll) Brigette Ellis is the lead makeup artist for the HBO smash hit, True Blood. This Minnesota gal’s big break happened when the movie Angus was shot in her hometown. Brigette was then recruited to come to LA at 21 years old.This super talented gal started in the union, which led to her winning an Emmy at age 23. How’s that for glambition? She’s no stranger to the genre: Brigette used to work as a makeup artist for the television series Buffy the Vampire Slayer in the ’90s. Now, she’s the lead makeup artist on True Blood. Brigette gave me the deets on all things Bon Temps undead and even walked me through EXACTLY how they get the vamps to cry blood (which to me, always looks like they’re crying Essie Nail Polish in Wicked). Check it, below.

Beauty Blogging Junkie: Brigette. I love True Blood. Let’s start with that. Now: What’s most exciting about working on True Blood?
Brigette Ellis: My favorite thing is getting to read the scripts in advance. I absolutely love working for series creator and executive producer Alan Ball. BBJ: What inspires you?
BE: My love for the craft! I absolutely adore making someone look gorgeous and then messing it all up/destroying it.

BBJ: What is most challenging about your job?
BE: Staying true-to-universe and making “executive” decisions about a character’s makeup. For example, though Lafayette typically applies an entire face of drag queen makeup, I wanted his look for his dash to save Tara with Sookie [ed. note: Or, as vampire Bill says, SookAAYYY ] to be realistic. So I made sure to give him very minimal makeup that day to work in some of the backstory–that he didn’t have time to touch up his makeup. Bill tends to get tan on the back of his neck and on his hands, so I make sure to bring his levels back with foundation.
DM: How do you convey the many eras of the show’s varying aesthetics?(i.e., Bill’s flashbacks)?

BE: A lot of times, it comes down to eyebrows. We use a lot of eyebrow covers in order to stay true to the period we’re covering. We’ll use a prosthetic blender first, then paint on an eyebrow. 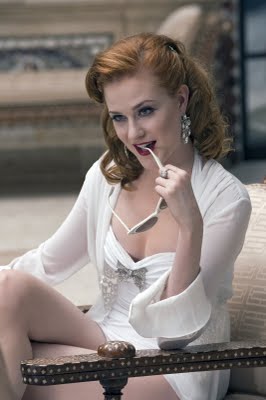 BBJ: What’s the aesthetic for the queen of the vampires, played by Evan Rachel Wood?
BE: She’s a very period-centric beauty, and I like that. Her red lips are always perfection, never bleeding. 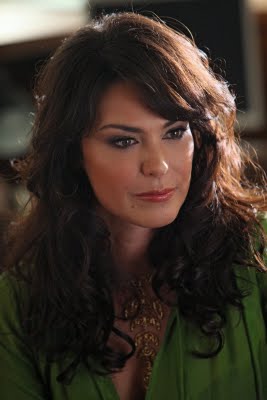 BBJ: How do you get the vampires to look so, well, bloody

BE: We color in the nail beds with ink and rim the eyes with a wine colored eye shadow.
I use the FX Skin Illustrator Scrapes and Scabs palette for the actors’ nail beds. It’s an alcohol-based paint that we use to create an aged blood color. Alex Skaarsguard, who plays Eric, loves the sun and gets pink, so we load him up with a lot of heavy pale foundation. I especially like Kevyn Aucoin The Liquid Airbrush Foundation. I also love Stila, MAC, and Laura Mercier foundations. Revlon ColorStay Mineral Mousse Makeup is great for hands and neck as it stays on forever. 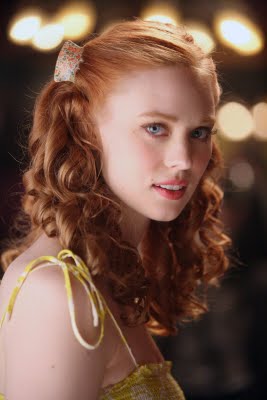 BBJ: What products do you like to use on the leading ladies of True Blood?
BE: We keep the humans very bronzed and sweaty (we spray them with water) to serve as a contrast to the vampires who are always cool and collected. On Anna Paquin, we use Dior Airflash Spray to get her natural pale brunette coloring into gear to play tan and blonde Sookie Stackhouse. Sookie is always in minimal clothing, so I try to keep her makeup simple. Everyday Sookie wears Cover FX Concealer, tarte Madame X Eye Liner NARS blush in Gilda and mascara in Bon Temps, but goes much more glam when she ventures outside of her hometown. Her waitress lip concept is Smashbox Lip Treatment in Bean, Laura Mercier Lip Colour Sheer in Baby Lips. On Jessica (played by Deborah Ann Woll) we use a tinted moisturizer and lots of Lip Venom.

BBJ: What’s most challenging about your job?
BE: Staying true-to-universe and making “executive” decisions about a character’s makeup. For example, though Lafayette typically applies an entire face of drag queen makeup, I wanted his look for his dash to save Tara with Sookie to be realistic. So I made sure to give him very minimal makeup that day to work in some of the backstory–that he didn’t have time to touch up his makeup.

Practical effects mean that I’ll go in and literally place a tear next to the actor’s tear duct and then will be edited out in the final cut. When you see a lot of tears or heavy, ongoing crying, that’s visual effects. Here’s how visual effects work: The actor will cry normally, and then the tears are colored graphically to be red after the fact.

Examples:
When Jessica finds out that she will cry blood tears for the rest of her life–or her existence, rather–she cries a single teardrop. That one, I went in and applied. When Eric was crying about the loss of Godric was also achieved practically. I put the first blood tear into his eyes using a theatrical makeup brand’s product called My Blood. In the scene where Eric is completely devastated and Sookie finds him literally all cried out, we used three layers of blood: a tattoo-like ink, our fresh blood (again, My Blood), and dried blood as well. I’m aware that my job sounds so weird when I explain it like this!

Thanks, Brigette for taking the time to discuss all things TB with me! Season three shoots in December in L.A., we wish you luck!