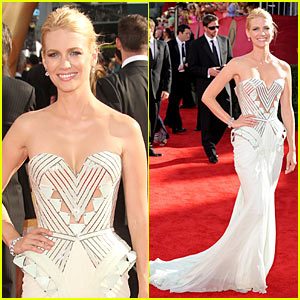 One of my favorite looks of the evening was the Grace Kellyesque January Jones of Mad Men. Here are the deets about her look, straight from my inbox:

Makeup:
Makeup artist Rachel Goodwin was inspired by sleek modern shapes. “The overall look
was meant to feel strong but refined. I used textures that reflected the
construction of her dress which felt both futuristic and classic all at
once.”

“I prepped January’s skin with CHANEL Hydramax + Active Moisturizer. I
used cool taupes and greys on the eyes, including CHANEL Soft Touch
Eyeshadow in Slate. I then shaded her cheeks with CHANEL Teint Innocence
Fluid Makeup two shades deeper than her skin instead of using blush, for a
more sculptural feel. We went with pale but not invisible lips with a
slight shimmer using CHANEL Glossimer in Beige Guitare. And finally, lots
of the new CHANEL Inimitable Noir Obscur Mascara on the top and bottom of
the eye for major definition.”

Mark was blown away with the detail and craftsmanship that went into making January’s stunning Versace gown. “While getting January ready, we had the dress hanging close by so I could see it while doing January’s hair, and that proved to be the inspiration for her overall look,” says Townsend, who loved all the lines and cut-outs of the dress, and wanted the hair to have the same feeling.

To get January’s hair from this glamorous event, Mark first sprayed Biolage Bodifying Spray Gel in her damp hair and blow dried it with a medium round brush. Then, he took sections of her hair pulled and pinned them back one at a time. January has shoulder length hair, so he needed to pull the hair back in sections because it is too short to pull it back all at the same time.

Mark wanted the style to look like a textured chignon and by pinning sections at the back, he was able to achieve exactly that. He finished the chignon with Vavoom Shape Maker Hairspray to give the style some hold, and purposely let some hair fall loose around the front to catch the light.