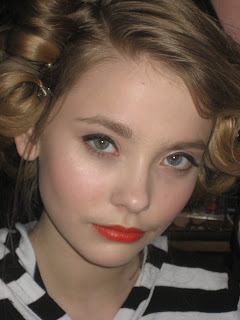 Check the makeup look at Twinkle by Wenlan, my FAVE thus far at #NYFW this season.

It’s TO DIE. My new bestie, MAC makeup artist Gregory Arlt broke down the deets for me at the Classic Car Club downtown on Hudson Street. The inspiration is “first date makeup for a date at the drive-in in the ’50s,” explained Gregory. Uh, I’m totally sold. Gregory and I then digress into a tangent about how much we adore Mad Men before MAC’s Jerry comes by and I remember I need to keep it brief. It’s so hard. We have so much to SAY. So Gregory confirms that you indeed need to rock this makeup with a poodle skirt “and with some Twinkle by Wenlan, obviously.” Obviously. The application is nontheatrical, however. It’s applied with medium intensity, “like this girl has watched her mom apply makeup and is doing a scaled down impression of it.” It’s a softer look. “Mom light,” Gregory deadpanned. Brows were defined with a bit of pencil for “crispness,” but with added shimmer for a more modern look. The ’50s were all about matte makeup only because people didn’t know from shimmer then. Eyes were lined with MAC Fluidline in Blacktrack a slight elongation. “Not quite a cat eye. It’s less aggressive than that,” Gregory said. “A kitten eye.” A KITTEN EYE. Naturally, I love this. I told him so. The model he was working on piped in that she ALSO is loving the kitten eye concept and wants to involve it in every day convo. Blush was a shade called Well Dressed. Shadow used was MAC’s Phloof and Naked Lunch shades. Then, we discussed the gorgeous tomato red lip using a MAC lipstick shade called Lady Danger that I will be rocking ASAP. I can’t even wait until Fall 2009. “Every woman needs a red,” Gregory insisted.

His favorites?
1. MAC Lustreglass in Venetian, a candy apple high shine gloss. Dita Von Teese, a pal of Gregory’s, wears this to yoga class when she’s “being low key,” according to Gregory.

2. When you’re ready for a red lipstick, but still are intimidated by a big bad matte, start
with MAC Lipstick in Lady Bug
3. The best rich, real Mad Men red in Gregory’s world is MAC Ruby Woo. 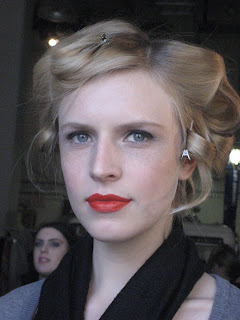 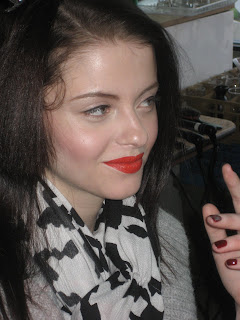 Do you love the orange red lip? 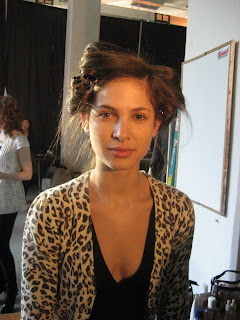 This model (above) is hands down, THE nicest model I’ve ever met. She’s Mexican (can you believe? She has such light features!) and was hilarious and unbelievably personable. She was joining right in the convo I was having with Gregory. Onto the hair, dolls! 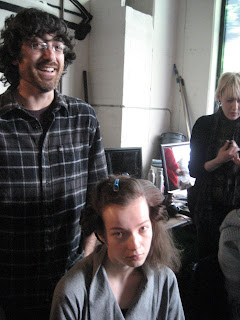 John Ruidant for REDKEN (pictured with model, above) created the hair look for the show. Unfortunately, I wasn’t able to snap a pic of the finished look (most of the girls were getting their makeup done while their pinned hair set), but I’ll explain it well, I promise. In keeping with the ’50s drive-in theme, John created a slightly exaggerated deep side part with a natural wave. Hair was down, loose and flowing. He began with blow-drying REDKEN Fabricate into the models’ hair. Then, he curled it with a 1 and 1/4 inch curling iron, first spraying with REDKEN Hot Sets 22 Thermal Styling Mist. The curling iron was kept vertical and John curled hair toward the face in the front for a retro wave. The ends were curled for a sleek effect – no untidy loose ends here. Lastly, the front was blow-dried with a round brush for smoothness. John used the pointy end of a tiny brush for a clean part line. After the hair set while the girls had their makeup done, John brushed out the curls and applied REDKEN Workforce Flexible Volumizing Hairspray. 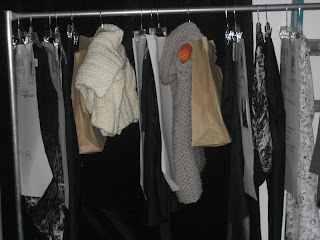 The clothes at Twinkle by Wenlan!